Adriel is one of the Angels Of Death. His name means “My Help Is God”. And he is one of the ruling angels of the 28 mansions of The Moon. Being the ruler of the Seventeenth Mansion of The Moon. Also known as Alchil or The Crown of Scorpio. He is also one of the Guardians of Heaven. 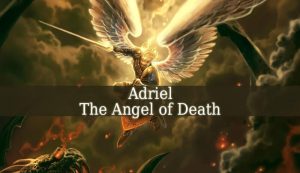 He is one of the celestial guardians of the South Wind and the East Wind. As related in Ozar Midrashim II 316a and 317. But he has many more responsibilities. Therefore, Adriel is one of the angels of death. But he is also one of the Angels of The Apocalypse. He has a big mission during the end times. According to Heywood, this powerful angel will “in the last days slay all souls then living”.

Adriel The Angel of Death

According to Rabbinical lore, there are 14 Angels of Death. And Adriel is one of them. The other 13 angels of death are: Yetzerhara, Yehudiam, Abaddon, Azrael, Sammael, Metatron, Gabriel, Kafziel, Mashhit, Hemah, Kesef, Malach ha-mavet and Leviathan.

This celestial being is often mistaken with Adrael. But they are not the same. Although their names has the same meaning. Adrael is just an angel who serves in the 1st Heaven.

Angel Adriel is often mistaken with Hadraniel. Who’s a porter angel at the 2nd gate of Heaven. Hadraniel’s name means “The Majesty of God” and he has nothing in common with Adriel. Not even their mission in the end times.

Adriel in The Bible

The name appears numerous times in The Bible. But it does not refer to the angel. He is the son of Barzillai the Meholathite. He appears in bible verses such as 1 Samuel 18:19 or 2 Samuel 21:8.

When to call upon Adriel?

This powerful angel can help you when you are facing a lack of self-confidence. He will help you repair your shattered self-image. But he can also help you to accept the changes around you. He will make you understand that the changes are important in your life. And they help you to move forward in your life path. He is also the angel of honesty. Therefore, he will influence you to be honest not only with yourself. But also with those around you.