Yelahiah Angel of Warriors is the 44th name of God. The Bible scripture according to the name is: “Accept, I beseech thee, the freewill offerings of my mouth, O Lord, and teach me thy judgments”. The meaning of the name Yelahiah is God The Eternal (Deus Aeternum). He is one of the Malechims (Jewish) and Powers (Christian). 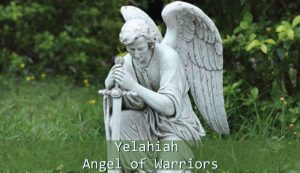 Yelahiah is the angel of karmic warriors. He is the warrior of the the Divine Light. Yelahiah is the protector of the Universe. He is the one who protects and makes everyone respect the Divine Justice. He is the angel you have to pray to when you need help with initiations. Yelahiah can allow you the ability to solve conflicts that were created by human behaviors. He can help you get rid of your karmic debts. When you pray for his guidance, he will lead you to success, victory and peace in everything you do. When Yelahiah is in your life, you are going to feel loyalty, bravery and courage around you.

Yelahiah fights against evil forces. He can erase war, brutal, aggressive and vindictive behavior. Pray for his protection when you face injustice. He can cure the tendency to overwork. He can remedy lawbreakers and those who work against the Divine Justice.

Yelahiah Angel of Warriors is the protector of those who were born between October 29 and November 02. Those who were born in this period are successful in everything they do. They love to travel and to accumulate knowledge. Therefore, they love historical facts. They often use memories from past lives to clarify historical doubts. They are also very courageous and loyal to their goals. Their name and reputation are important for them and don’t worth any risks. Those who were born under the influence of Yelahiah Angel of Warriors are great investors and know how to manage their earnings. They express their love for their family in a constructive way. They are respected and admired for the way they solve problems and create ways to increase the intellect of others.