Yehuiah Angel of Subordination is the 33rd name of God. The Bible scripture according to the name is: “The Lord knoweth the thoughts of man, that they are vanity”. Firstly, the meaning of the name Yehuiah is The All Knowing and Omniscient God (Deus Omnium Cognitor). Also, is one of the Virtues. 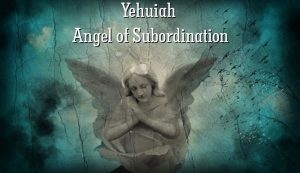 Yehuiah is the angel of subordination to the Higher Order. He can allow you the capability to withstand high tensions. He can teach you to let go and avert confrontational situations. When you are protected by Yehuiah, you become more honest and faithful to all that is superior. He can help you to recognize the hierarchy.

When you ask for his guidance, you will become more conscious of your place in the Cosmic Order. Yehuiah can help us to unmask traitors and to uncover certain schemes. He supports the altruistic initiatives. His presence in your life brings a sense of duty. Yehuiah can allow you find the greatest contracts, alliances, commitments and scientific discoveries. He can transform anyone in a trustworthy person.

Yehuiah is the one who fights against rebellion and aggression. Pray for his help when you can’t deal with the hierarchy in your life. Also when you are pushed aside or dismissed form certain positions. Yehuiah can remedy perversity, people with multiple desires and a lack of moral strength. Yehuiah Angel of Subordination can help you in conflicts. You should ask for his guidance when you have betrayal scripted in your unconsciousness. He can also help you fight against superiority or inferiority.

Yehuiah Angel of Subordination is the protector of those who were born between September 03 and September 07. These people will be known as the defenders of God’s works and the angelic world. They are understanding, sympathetic and loving. Therefore, they have the recognition of everyone around them. They already know their underworld and reality. And they will not be won by illusions. They are also extremely courageous. Therefore, they will always fight to elevate their spiritual tendencies. They will be good teachers of spiritual practices. And they are always keeping the balance in their lives, even in their home. They also have a great power of concentration, maturity and spiritual strength, which will convince everybody to respect them.