Who Are The Bene Elohim?

Bene Elohim – also known as ben elohim, beni elohim, bene elim or b’ne elohim. Their name means “Sons Of God”. And they are an order of angels and archangels. They are also a subdivision of the choir of angels known as Thrones. Although, sometimes they are even equated to the Thrones. 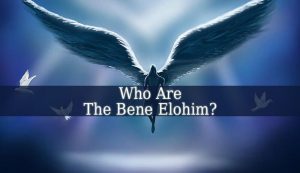 The Bene Elohim are also very often equated with Issim and The Archangels. According to numerous sources, these angels rank 9th in the Celestial Hierarchy. Not only The Zohar mentions them ninth, but also Azilut. But according to Berith Menucha, they rank 3rd as importance in the celestial realms.

The main duty of the Bene Elohim is to continuously praise God. Their ruler is Angel Hofniel (“Fighter of God”). But Azazel also got the same title.

According to the Jewish Philosopher Maimonides, there no less than 10 celestial orders. On of which are the Bene Elohim. The 10 orders from highest to lowest are: Hayyoth, Ophanim, Erelim, Hasmalim, Elohim, Bene Elohim, Cherubim and Ishim.

Why are there 10 angelic orders?

According to Jewish teachings, the Tree of Life has 10 stations. Also known as Sephiroth. Each of these stations has an Archangel, and angelic order, an archdemon and an order of demons.

Each station has a name: Kether, Chockmah, Binah, Chesed, Geburah, Tiphareth, Netzach, Hod, Yesod and Malkuth. Hod is the 8th station. Its title is Splendor. And its Divine Name is Elohim Sabaoth (God of Hosts). The ruler of this station is Archangel Michael. The angelic order of the Hod is Bene Elohim. Also the archdemon of the 8th station is Adrammelech and the demonic order called Samael or The False Accusers.

Who are the Bene Elohim?

The Bene Elohim are very often equated with the Erelim. The angels made of white fire and as strong as 70,000 myriads. They also appear in Genesis 6:2, being equated with the angelic order Ischim. Although Bene Elohim means “Sons of God”, many theologians avoid translating it properly. They prefer “Sons of Man”, to avoid attributing the sin of sexual involvement with mortals to the angels.