Home / Spirituality / What Is The Ultimate Goal Of Hinduism?

What Is The Ultimate Goal Of Hinduism? – Hinduism is the oldest religious philosophies which is still practiced today. Therefore, Hinduism is even older than Judaism and Buddhism. It is about four thousands of years old. Throughout the years, Hinduism suffered some changes, but the goal of the religion remained the same. 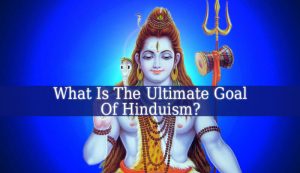 Hindus use different methods to obtain spiritual enlightenment. The most popular spiritual practices in Hinduism are: meditation, yoga and contemplation.

Meditation is a thousands of years old spiritual practice. It brings relaxation, calms the mind and relieves stress. Meditation must be practiced seated or lying down. It usually starts with calming breaths. The key is to focus your attention and achieve mindfulness. Here are different meditations, such as mantra meditation. It uses the famous “Om” sound or the names of deities. Other mantras might be prayers to the Hindu deities.

Yoga is a spiritual and physical practice which gains more and more popularity in the western culture. Although, while most westeners use it as a work out practice, it has deeper meanings and goals than that. Yoga is practice developed thousands of years ago. It brings balance in your mind, body and spirit.

Other ways to practice faith in Hinduism is by making offerings in the temples of different deities.

The Most Important Hindu Deities – The Hindu Triumvirate

The Hindu Triumvirate contains contains the 3 forms of the Supreme God. Hence, in Hinduism there is only one Supreme God, which manifests in different forms. The three forms are: Brahma, Vishnu and Shiva. Brahma is the God of Creation or the creator. He appeared first, created everything and then he backed away, letting the next deities do their works. The second deity is Vishnu. The protector and preserver of the Universe. And the third one is Shiva. Also known as the god of destruction.

In conclusion, now you know What Is The Ultimate Goal Of Hinduism. All of the spiritual practices of Hinduism were developed to lead to spiritual awakening or enlightenment. So the Hindus have a chance to break free from the cycle of rebirth and reincarnation. But this requires more than meditation, yoga and worship. Because one’s acts can create karma and force him to reborn.