Home / Angels / What Are Demons?… Well, Not Fallen Angels!

We see demons everywhere, in movies, shows, in advertisements, and more. But did you ever ask yourself What Are Demons? Most of the people around the world think that the demons are the fallen angels. Those celestial beings that rebelled against God alongside Lucifer. And they have been banished from The Kingdom of Heaven and sent to earth. But what are demons if not fallen angels?

How were the demons created?

Did you ever hear about the term Nephilim? If not, then you should search more about the subject. In a few words, after being banished from The Kingdom of Heaven and sent to earth, the fallen angels started teaching human beings, our ancestors. They thought them magic, sorcery, weaponry, and more. 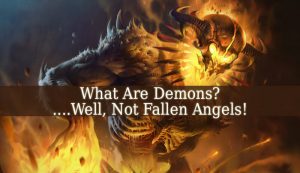 But one day, some of the fallen angels decided to do the ultimate rebellion against God’s will, sleeping with the daughters of men. The women started to give birth to giants called Nephilim. Who were half human and half fallen angels. When God saw what happened, he sent his archangels to kill all the Nephilim. The duty to kill all the Nephilim Giants belonged to Archangel Gabriel. This whole tale is extremely important, because the demons we know today are the souls of the giant Nephilim killed by Archangel Gabriel.

Enoch continues: “And the spirits of the giants afflict, oppress, destroy, attack, do battle and work destruction on the earth, and cause trouble; they take no food, but nevertheless hunger and thirst and cause offenses. And these spirits shall rise up against the children of men and against the women, because they have proceeded from them.”

So, What Are Demons?

As you can see now, the demons are the spirits of the giant Nephilim who are half flash and half celestial. They started to rebel against human beings, oppressing and killing them. Even after their death, they still don’t stop the oppression. Trying to get us into trouble, still. Although they are in spirit form now, they are evil spirits and they can still do bad things to us, human beings. So, if you experience a demonic attack or oppression, don’t hesitate to pray for the help and protection of Jesus Christ. I know that this is not compatible with the New Age spirituality, that many of my readers belong to. But Jesus is the only one in the Bible who can banish demons. The evil spirits are afraid of Him. So if you are in trouble, it’s enough to say Jesus’ name!

Share
Previous Seraphiel
Next How To Recognize A Nephilim?