Is Uziel Holy or Fallen?

Is Uziel Holy or Fallen?

Uziel is one of the controversial angels. Mostly because he appears both as a holy angel and as a fallen one. You can find him under the names: Uzziel, Usiel or Azareel. His status of being holy or fallen, also depends on which name we refer to. Let’s see! 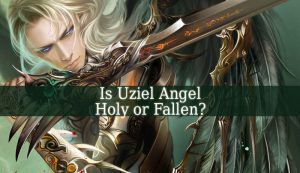 Uziel – the name appears in Pirke Hechalot. It refers to Uziel as the 5th of the 10 unholy Sephiroth.

Uzziel – his name means Strength of God. In rabbinic angelology, Uzziel is one of the Principal Angels. He is also one of The Cherubim. But some sources mention him as a Virtue or Malachim. Uzziel is also the chief of the choir of angels called Malachim (the equivalent of Virtues). Uzziel is also present in Merkaba lore. Being the angel of mercy. And being under the rulership of Archangel Metatron.

Uziel – Should you pray for this angel’s help?

Being both holy and fallen, I advice everyone to avoid praying for this celestial being’s help. Mostly, because only The Sefer Raziel describes him as a holy angel. And the probability of him being a fallen one is big. So, if you encounter this angel in your meditation or psychic sessions, then stop the whole session and pray for Archangel Michael‘s protection. He will protect you from the evil presence. And the fallen angel will not be able to get to you.

Share
Previous Who Are The Grigori Angels?
Next Azazel The Fallen Angel