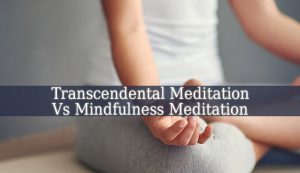 They have different origins – firstly, Transcendental Meditation (TM) has Hindu origins. But Mindfulness Meditation is a Buddhist meditation.

They have different history – TM has a significantly shorter history than Mindfulness Meditation. Mahareshi Mahesh Yogi is the developer of TM. He developed this meditation in 1955. Afterwards, it quickly started to spread from India to other western countries, mostly the US. But Mindfulness Meditation has a more vast history. This meditation is believed to come directly from Buddha himself. And the Buddhist monks practice it for thousands of years. It became popular due to the New Age movement.

They are different as exercises – briefly, TM is a simple mantra meditation. The practitioner repeats a certain mantra (which is secret for non-initiates) for about 20 minutes. On the other hand, Mindfulness Meditation is a focus meditation. The practitioner focuses on certain objects, thoughts or his breath. Focusing your attention, allows you to clear your mind. Then just turn it off, and enjoy the mindfulness. This kind of meditation often requires Meditation Tools.

They have different ways to learn it – in other words, TM is not a meditation that you could start practicing at home, alone. You have to buy a course from a master with certificate. A little bit concerning is the fact that TM became like a cult. Every initiate signs a contract that forces them not to divulge the “secrets” of this meditation. Due to this, only those who pay big amounts of money (which I will talk about below) will discover the secret mantras and methods. But mindfulness meditation is easily found online. There are many available videos describing it and giving tips about it. Also, you can practice it alone, at home.

The have different prices – as I mentioned above, those who wish to learn TM will have to pay big amounts of money. And when I say I big, I mean big. Because a course is at least one thousand dollars. But Mindfulness Meditation is mostly free. But if you want to learn it from a master, monk or DVD, then it is still vastly cheaper than TM.

The dilemma of Transcendental Meditation Vs Mindfulness Meditation is met by many people searching for spiritual awareness. If this article seems that I am a little pit more inclined toward Mindfulness Meditation than TM, well I am. And I recommend The first one if you are at the beginning of your journey. Honestly, what scares me the most is the cult like community of the TM practitioners. Therefore, if you choose TM, be careful. And don’t let your thirst for knowledge put you in danger.