Tibetan Monks are followers of the religion called Tibetan Buddhism. This type of Buddhism is derived from the earlier Indian Buddhism. It is popular in Tibet, Mongolia, Bhutan and parts of Russia. Tibetan Buddhism is considered the state language in Bhutan. They are the most devoted spiritual beings who dedicate their lives to Buddha and to reach enlightenment. 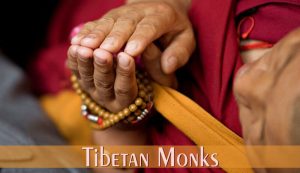 Ages ago, Tibetan Buddhism was one of the most popular religions in Asia. There were thousands of of monasteries full of monks searching for enlightenment. Every family tried to send at least one boy to learn and follow Buddha’s steps. The monasteries were not considered churches. People came to Tibetan Monks to learn and study.

The Buddhist monks are very well respected human beings. Their life is full of spiritual works, practices and rituals. They start the day early in the morning and finish it late at night. The day is full of disciplines and rituals they have to follow daily for a proper spiritual life.

When a monk is new in the monastery, he usually helps with disciplines around the yard or in the kitchen. But when they get older they get more and more responsibilities. Older monks or, so called, lamas have to maintain the discipline around the new Tibetan Monks. They lead the younger groups to prayers.

Tibetan Monks learn at the monastery how to meditate, how to find and maintain inner peace. They learn how to deal with the pain and the suffering such as Buddha did. But they get other educations also, such as literature, grammar, astrology, medicine, crafts, chanting, etc. They have to learn prayers and their proper intonation in Tibetan language. When they learned how to read, there will be about 18 years of study. They have to learn all the Sutras and Tantras. Also they have to read every Budhhist text.

They know that those texts are full of wisdom. With intense study and contemplation they can extract the useful information and teachings. Tibetan Monks will learn how to reflect on Buddhist philosophy texts. They will learn how to use meditation in the meaning of certain texts. They also learn Buddhist theology bu studying the Sutras. The highest degree in the Buddhist theology is the Geshe Lharampa. The monks can achieve it by participating to debates with high lamas.

Tibetan Monks will learn different habits. One of them is keeping their material possession to the minimum. When they enter a monastery, they will posses only a bowl, three robes, an umbrella tent, a bathing cloth, a kettle and a water filter, a pair of sandals, a mosquito tent and a razor. They have to learn to live with no attachment to the physical world. Such as Buddha did.

We must respect these monks because they dedicate their life to reach enlightenment and to help others to save their souls too. We can learn a lot from their lifestyles. Adopting a few of their habits can help us get closer to the spiritual world. Just a few habits can teach us how to live without pain or suffering, as Buddha lived the rest of his life after enlightenment.