Star Spiritual Meaning – The night sky wouldn’t be as beautiful as it is if there wouldn’t be stars. The stars were always magical and inspiring for humanity. As a result, it became a spiritual symbol all over the world. To understand the Star Spiritual Meaning, we have to analyze it from different points of view. I will start with the biblical meaning of the Star of Bethlehem, then I will analyze it from other culture’s symbolism. Let’s see what does a star mean. 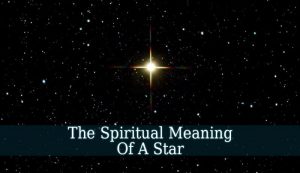 The Star Of Bethlehem – it is a divine sign. From a Biblical point of view, the star means a sign from God to follow his path. God leads people using different physical phenomenons. The star was his way of leading the Magi to His Son.

The Star of David – it is six pointed star which is formed by two equal triangles. It is the powerful shield or armor of King David. But it is also the Seal of Solomon. But the true roots of this star are found in Hinduism. Each angle of the star has a different symbolism. They represent Brahma, the creator, Vishnu, the preserver and Shiva, the destroyer.

The Pentagram – It is a five-pointed star encased in a circle. Each point has its spiritual meaning. The upward point symbolizes the spirit. The remaining points represent the four elements (earth, air, fire and water). The spirit being the 5th element. The Star Spiritual Meaning as a pentagram is all about connection. It represents the connection between our spirit and all the elements of this world.

Dreams about stars – they usually carry positive meanings. The stars represent our desires, goals and even our true spirits in our dreams. They also mean illumination and clearness. But they very often symbolize faith and hope. And stars in dreams might be the messengers of a new beginning.

The Star Spiritual Meaning is numerous. To explore it deeply, research different cultures and their histories. The star as a symbol appears in every culture on earth. Because the stars are magical and inspiring.