Spiritual Symbols are objects, visual representation that suggest ideas, beliefs and cultures. Every religion has its own symbol. Each one of these symbols has its own purpose. They were created to represent a certain belief. These Spiritual Symbols can awaken love, hate, darkness, mystery. Therefore, these symbols are powerful. Being able to fill us with energy and emotions when we are next to them. 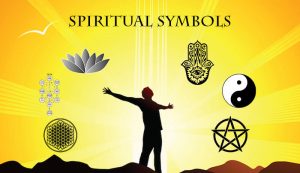 There are a lot of symbols, as many as religions and cultures. I will talk about the most common symbols and their meanings. Some of them are also very powerful Meditation Symbols or Yoga Symbols.

The flower of life

It is the symbol of sacred geometry. Also it is a very complex geometrical symbol. It contains all the ways of creation. Hence, it was present in almost every ancient cultures. It is also believed to be the the sacred formation that gave birth to creation.

Firstly, it is a Wiccan symbol. At least, most of us believes that. So, it is a 5 sided pentagram within a circle. It is believed to be the representation of the 5 elements. The top point is the spirit and the other four are the four elements (fire, water, air and earth). It is a protecting symbol for evil forces.

The tree of life

It doesn’t have have a particular religion to belong to. It is present in most of the ancient cultures and religions as well. So, it is a symbol of infinite connection. It is the connection of the four elements. The connection between everything that have ever been created. It also represents the circle of life.

It is a powerful symbol in Buddhism. But this symbol is present in many more spiritual cultures, being the symbol of enlightenment. The lotus became connected to the enlightenment due to its way to grow. It grows from the dark water, growing beautiful flowers that open to the sunshine. The symbol of accomplishing something beautiful from something dark and ugly.

It is a powerful symbol of protection. In Arabic, hamsa means “five”. It represents the five fingers of the protecting hands. The eye in the middle can observe every evil look upon you and protect you from them.

These Spiritual Symbols are important for every religion that they belong to. Each one of them has a purpose and importance. They can help you protect yourself, find spirituality, seek enlightenment.