Spiritual Meaning Of Numbers 6 to 9 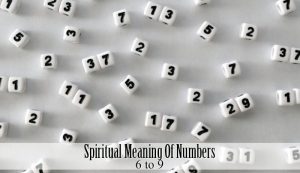 Let’s continue with the numbers from six to nine and I will talk a little bit about Spiritual Meaning Of Numbers including zero.

It is the symbol of harmony and equilibrium. It also symbolizes luck, love, beauty and health. Six is also the symbol of truth and sincerity. It can also mean enlightenment. It can give us the physical, emotional mental and spiritual balance that we need for spiritual awareness. In the Chinese culture six represents the Universe. Also, Christianity six is perfection, it is the man’s number. But in Hebrew culture there were six days of creation, as in Christian, Kabbalism and Sumerian cultures.

It is symbol of mystery and magical forces. Seven also represents our connection to God. There are seven circles of the Universe, there are seven days of the week and also seven heavens and hells. There seven musical notes. In Christianity, God is the 7th ray in the center of the representation of the six rays of creation. But in Hebrew there are seven archangels. Also, in Buddhism, There seven steps of Buddha which symbolize the seven cosmic stages.

It has a different Spiritual Meaning Of Numbers. Eight symbolizes success, opportunity and strength. Eight is the symbol of infinity, it is continuation and repetition. There are eight directions in space. So, in Buddhism there are eight symbols of good augury. In Chinese cultures eight represents the whole and it is a number that brings good luck. But in Christianity, eight represents regeneration and there are eight beatitudes. In the Egyptian culture eight is the number of Thoth. Also, in Hinduism, eight is important because the Mandala is the 8×8 symbol. There are eight regions of the world, divisions of the day ans chakras in their culture.

It is the symbol of universal influence. It has the highest vibrational frequencies. Nine is composed of the 3×3. Nine is the powerful Triple Triad. Number Nine is a celestial, angelic number. If you see it frequently, a celestial being or guardian angel might have a message for you. Nine is the symbol of accomplishment. Nine represents intellectual power and influence. So, in Buddhism, nine is the symbol of the supreme spiritual power. Also, in the Egyptian culture nine symbolizes the Ennead. In the ancient Greek culture there were nine Gods. But in Kabbalism nine represents foundation. In Hebrew nine in the pure intelligence.

The Spiritual Meaning Of Numbers is different for every number. If you see a number repeatedly, you should take a look at the symbolism. The number have messages for you. Learn how to read them.