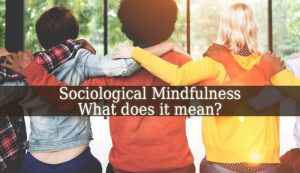 A simple and easily understandable definition might be the following:

But what if you are sociologically mindful, but the very last effect of your actions hurt others at the end. Not directly, but it still does. Schwalbe explains this problem very well. He brings up the example of a working person. He works and contributes to the society. But what if this person works at a weapon or cigarette factory? Now the things are getting a little bit more difficult. Because the person is working hard. And he doesn’t want to hurt anyone. He also needs a job, so he can provide to his family. But the result of his work kills hundreds.

Another big dilemma in this philosophical idea is religion. How could you be sociologically mindful upon the rules of your own religion, and hurt or ignore those who does not follow the same rules?

Most religions are inherently discriminating against people of other religions. I said most, not all of them. And upon discrimination I am thinking about marginalizing those who haven’t been baptized in that particular religion. Interesting idea.

And there is the question Which Religion Is The Right One? Answering this question is hard. At least from a sociologically mindful point of view. Because naming one religion as the right one, hurts the rest of the world. Mostly, this is why Sociological Mindfulness is not compatible with any religion. At least not with most of them.

Also, in today’s society, it is hart to provide constructing criticism because it hurts most people’s feelings. In my point of view, people are getting too sensitive. Making it even harder to become sociologically mindful. This is why I personally opt for the simple Mindfulness. But without giving up on being as sociologically mindful as I can. As Dalai Lama XIV said: “Our main purpose in this life is to help others. And if you can’t help them, at least don’t hurt them.”