Angel Shamsiel The Guardian of Eden

Shamsiel or Shamshiel is the celestial Guardian of Eden. His name means “Ligh of Day” or “Mighty Sun of God”. He is the ruler of the 4th Heaven. Where he also lives. He appears both as a holy angel and a fallen one. He is not only a great guardian, but he also aided Uriel in battle. 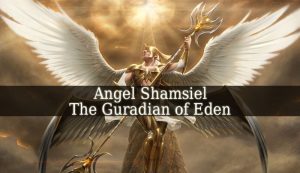 Shamsiel lives in the 4th Heaven alongside Sandalphon, Michael, Sapiel and Zazagel. The 4th Heaven is also known as Zebul, according to Hagiga. And Shamsiel is its ruler. But he is also the Prince of Paradise and Guradian of Eden on Earth. Therefore, he is one of the most important celestial guardians.

But he has other responsibilities also. Shamsiel is the angel who crowns our prayers. And then takes them to the 5th Heaven. He is also the chief of 365 legions of angels (spirits), as told in The Zohar. The same source mentions the angel as one of Uriel’s aids in the battle. Helping the archangel to bore his standard in battle. The other angel being Hasdiel.

It is believed that Shamsiel was the guide of Moses. When he visited Paradise still in flesh. Also, this powerful angel was the one who the treasures of David and Solomon were turned over by Hilkiah.

The Book of Protection mentions the angel as a spellbinding power. The same abilities given also to Michael, Nuriel and Sarphiel.

Shamsiel as a fallen angel

In The Book of Jubilees, Shamsiel is described as one of The Watchers or Grigori. Who rebeled against God. And came down to earth to teach humankind about wars, magic and sin. Being also often equated with the demon Samsapeel.

1 Enoch also mentions the angel as a fallen one. Being the angel who teaches humankind The Signs of The Sun.

Due to him being depicted both as holy and fallen, I don’t recommend to pray directly to Shamsiel.