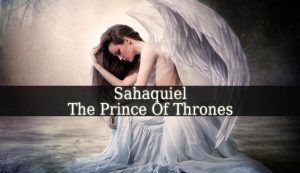 His name means The Ingenuity of God. And he is mostly known as The Angel of The Sky. Angel Sahaquiel is also known as Sahaqiel. And according to Enoch, he is one of the 7 most powerful angels. He rules over the 4th heaven. And he is attended by no less than 496,000 myriads and ministering angels. Also he is one of the 7 holy and powerful archangels.

Sahaquiel the Prince of the 4th Heaven

The duty of ruling over the 4th heaven was also given to angel Shamsiel. Who is also known as the Prince of Paradise or the Guardian of Eden. But there other known rulers of the 4th Heaven such as: Oriphiel, Zabkiel and Zaphkiel.

The 4th Heaven is where the Thrones reside. Therefore, Sahaquiel is also the Prince of Thrones. He rules and watches over the Thrones. Making sure that they are honoring their duties. The Thrones are known as the 3rd highest orders of angels. Their main duty is to chant glorias to God. But they are doing many more.

But these Thrones appear in many sacred texts such as: The Testament of Levi, The Life of Adam and Eve, The Apocalypse of Elijah, The Book of Enoch and many more.

Archangel Sahaquiel makes sure that the Thrones mete out divine justice and they maintain the cosmic harmony. They also have to preserve the Universal Laws. Aggripa once said that “through thrones, humanity is knit together and collected into itself”.