Sabriel is the holy angel of miracles and impossible healing. He is believed to be one of the main 7 Archangels. Also, he is the ruler of the choir of angels called Tarshishim. This choir is the equivalent of Virtues. Sabriel’s healing crystals are Geranium and Bloodstone. Using these crystals in your prayers and meditations will bring the archangel closer. 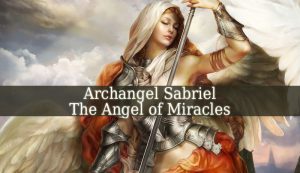 Angel or Archangel Sabriel is equivalent to Sabrael. He is the bringer of miracles. But he also has the ability to manifest impossible healing. This powerful archangel brings wonders and revelations into our lives. You can easily sense the archangel’s presence. His presence manifests by facing supernatural revelations often. Therefore, if you are often faced with shocking revelations about the spiritual realms, then Sabriel might be in your life, guarding you.

Angel Sabriel brings bigger or smaller surprises into our lives. Also he transforms a boring life into one filled with amusement and astonishing surprises. But beside bringing that spark of wonder into our lives, Sabriel is also a great healer. He has the ability to heal even those with terminal illnesses. He doesn’t have particular illnesses that he can heal. Therefore, he can be called upon to accelerate healing in any case.

Sabriel appears not only in The Testament of Solomon, but also in 3 Enoch. Both sources categorize him as one of the Seven Archangels. Maseket Azilut also mentions the archangel. It describes the angel as the ruler of Tarshishim or “The Brilliant Ones”. But he is not the only ruler of the choir of angels. Tarshiel is another ruler of the Tarshishim.

Sabriel also appears in The Jewish Encyclopedia. It describes the archangel as the Guardian of The First Heaven.

Occult teachings also mention the Archangel. He is the only one who can overcome the demon called Sphendonael. Also known as the demon of disease. This demon causes serious illnesses. Which can be healed only by imprisoning the demon. This is where the archangel comes in. He imprisons Sphendonael and the miraculous healing takes place.