Remote Viewing is the ability to perceive or see details about a target which is far away, in another time or shielded. It is a psi or or psychic phenomena. It uses an extra sense. Therefore, the remote viewer perceives extra-sensible things.. Remote Viewing has other designation such as telesthesia or travelling clairvoyance. 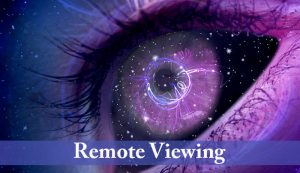 It couldn’t be scientifically demonstrated where this ability comes from. But it is a similar ability as clairvoyance or telepathy. Those who have this ability describe it as seeing remote objects clearly with their inner eye. Remote viewing is like a mixture of perceives. The process of viewing an object remotely can bring other senses to life such as smell or taste. It is like a spiritual traveling. The person with this ability can send all his senses to that place and perceive it as he is there in body.

The term of remote viewing was firstly used in the 1970s by Russell Targ and Harold Puthoff. They were two physicists and parapsychology researchers at the SRI. People with this ability were used in different projects starting in the year of 1975. They were used in several projects sponsored by the government to see if the psychic phenomena could be used in different military applications. But the researches stopped in the year of 1995 because the projects failed constantly and didn’t offer the intelligence information the government needed. The most famous of these projects was The stargate project. The psychic used in this project was Joseph McMoneagle. But the most popular and respected remote viewer is Ingo Swann. He also participated in researches. And he wrote many books about his experiences. If you want to know about this amazing ability read one of his books.

What can a remote viewer do?

A person who has this amazing ability can see details about a location, object or a person which is far from the remote viewer. They have the ability to give information about objects, situated on the other side of the planet, that they have never seen before. But remote viewers are also able to travel in time and remote view in time.

This amazing psychic ability or psi phenomena is very rare. Not many people have this ability. And even if they have it, they try to keep it secret. Nowadays, the scientific researchers and the mainstream media picture psychics as frauds and liers.

We must understand that amazing abilities such as remote viewing, clairvoyance or telepathy are spiritual gifts. And we should respect them.