Penemue is somewhat a controversial celestial being. It appears only in The Book of Enoch. Therefore, he is one of the Enochian angels. And there he is described as one of the fallen angels. But this is not controversial per say. I mean, he is categorically a fallen angel. But many believe that he is not harmful.

Is Penemue a good or evil angel?

Although, in 1 Enoch 69:8-12 it is clear that Penemue is a fallen watcher, many believe that he didn’t do any harm to humankind. Let’s see what the does Enoch say about the fallen angel: 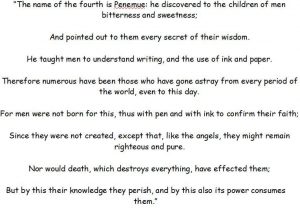 So, now you can kind of see why this watcher is so controversial. He did no harm… in sense that he didn’t kill people or teach people to make arms go to war. The three things he did was to teach the children of men “bitterness and sweetness”, to show them secret wisdom and to teach them to read and write.

Therefore, many people really think that this fallen angel didn’t really mean harm. Or… he was purely evil, but the passive-aggressive type. And he knew that teaching the children of men will open a door toward sin that will be hard to close. I mean, today, there are roughly 774 million people on earth who can’t read. The rest of us, roughly 6.5 billion, have higher chances to doubt God and to sin. And this is not an incorrect idea. If you look at the highly educated people on earth, they tend to become atheists.

In conclusion, Penemue, after the falling, tried to do what the serpent did in The Garden of Eden. And he succeeded. He showed us secrets of wisdom, knowledge, thought us to read and write, so we will overthink and doubt the One and True God. And we will perish in the end because of the knowledge!

Share
Previous Hofniel
Next Israfil – The Angel of Resurrection