Pahaliah Angel of Redemption is the 20th name of God. The Bible script according to this name is: “Then called I upon the name of the Lord; O Lord, I beseech thee, deliver my soul”. The name’s meaning is God The Redeemer (Deus Redemptor). Also, he is one of the Thrones. 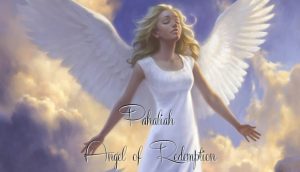 Pahaliah is the angel of deliverance. He is the angel who can help us awaken the Kundalini (the vital energy in us). Pahaliah Angel of Redemption allows people to know good and evil. He fills you with spirituality, morality, purity and the knowledge of the sacrifice in order to evolve. Pahaliah can help you rectificate errors produced by exalted desires. When he protects you, he fills you with courage and dynamism. He can help you to redeem and encounter your divinity. Pray for him to come into your world and bring harmony in your spiritual life.

Pahaliah is the one who can help you in difficult situations such as sexual abuse, squandering, debauchery, prostitution and short-lived affairs. Pray for his powers when you are the victim of abuse of power, extreme violence and fanaticism. Pahaliah Angel of Redemption can also help you with relentless struggle, rigidity and difficult destiny. He heals feelings like despondency, discouragement, illness and fear. Angel Pahaliah is the angel who opens the eyes of those who don’t believe in a Higher Power and transgresses Divine Laws. Take the courage to ask for his help when you desperately seek material possession or seek to convert.

Pahaliah Angel of Redemption is the protector of those who were born between June 27 and July 1. These people have strong personality, they are fighters for high ideas. Those people who were born under the influence of Pahaliah are optimists and love to live in peace with everyone. They are desperate for a faithful companion because they don’t know how to live alone. These people are looking younger than they actually are. They understand the invisible world as well as the visible one due to their thirst to explore spirituality.