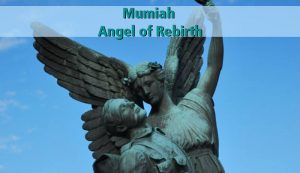 Mumiah is the angel of endings and rebirth. He is the helper of psychics. Because he is improving their receptivity, intuition and mystical experience. He is the patron of new beginnings and decisions that lead to big transformations. Angel Mumiah allows you the seeds of a new life. He is the announcer of the ending of a cycle and the beginning of new one. So pray for his guidance so you can understand the Law of Reincarnation. It is an ending and a rebirth. He can help you terminate and bring to an end any project that you have started. Mumiah Angel of Rebirth can help you to reach any achievement. And help you to materialize your dreams.

Mumiah Angel of Rebirth is the one you need when you feel fear of mystical experiences and intuition. He can make endings and beginnings much easier to achieve. He can help anyone who have lack of knowledge about reincarnation. Mumiah can help them stop refusing the existence of reincarnation. He can make you understand that life is eternal. He can heal behaviors like despair, depression, blocked horizon, tendency to give up, etc. Mumiah Angel of Rebirth will be next to you when you experience ruin, collapse, loss of loved ones. He fights those who act against the natural order.

Mumiah Angel of Rebirth is the guardian angel of those who were born between March 16 and March 20. Therefore, those who were born in this period will be discoverers of the secrets of nature. They will fight against evil. These people that new challenges bring new knowledge and fresh thinking. People influenced by Mumiah Angel of Rebirth, will help others fight depression. They have big dreams and work a lot to materialize them. Their words will help them attract wealth into their lives. Those who were born under the influence of Mumiah will be spiritual beginning in their childhood. They have deep knowledge about the universe and its micro/macrocosm.