The 3 Oldest Hindu Texts In Sanskrit 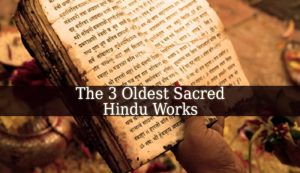 The Vedas – these texts date back to about 800 BCE. They originate from ancient India. The Vedas are the oldest Hindu texts and even the oldest texts in Sanskrit Literature. These sacred texts are very important for followers of Hinduism. The Hindus consider The Vedas “apaurusheya”. Which means “not of a man” or not of human origin. These texts also have no authors. Hindus believing that these texts are eternal. And they were created nor by human neither by gods. Although, The Mahabharata describes The Vedas to be created by Brahma.

There are 4 Vedas, each containing specific types of texts: Rigveda, Yajurveda, Samaveda and Atharvaveda.

The Upanishads – they are an important collection of ancient Hindu texts. Also, they contain fundamental philosophical concepts of Hinduism. This collection is often called Vedanta. Which can be translated in many ways. But basically describing the fact that the Upanishads are part of the Vedas. And it explains the Vedas.

The Upanishads are mostly philosophical texts describing and defining Hindu religious concepts. Therefore, concepts such as Brahman and Atman represent the central ideas of these texts. Some parts of the collection are believed to date back to about 600 BCE.

The Post-Vedic Texts – they are part of the Smriti class of ancient Hindu texts. This collection of texts contains the Sutras and Shastras. Also, this collection focuses more on sciences and laws. For example, the Dharma-Shastras is a huge law book. But The Post-Vedic Texts also contain texts about physics, chemistry, biology, economics, politics, sculpture and architecture.

In conclusion, Most Of The Earliest Sacred Works In Hinduism Were Written In Sanskrit because it was the language used in the 8th century BCE. When the first ancient Hindu works were written. These texts are a big part, not only of Hinduism, but the whole Indian culture.