Who Is The Mormon Deity?

Mormon Deity – Many people who look at Mormonism from the outside ask themselves who is the most important Mormon Deity. The response is God. They have a single God. The God the Christians worship, because orthodox Mormonism is a branch of Christianity. But they gave a name to “their” God. They call him Elohim.

The Mormon Deity – Who is Elohim? 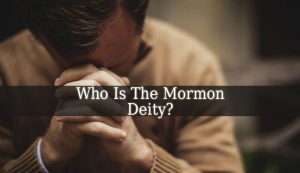 Elohim appears very often in The Hebrew Bible as a word or name to describe Israel’s God. But it is also often used as s noun for numerous gods of nations or plurality of gods that existed in ancient times.

But Jehovah is also very often used in The Old Testament as a name of God. The Hebrews also using Adonai or HaShem.

Also, In Mormonism, Elohim is considered a flash and bone human being who found salvation and “ascended”. He is an example for Mormons. And they consider themselves equal to Elohim. Therefore, they consider themselves gods, who deserve salvation. After this earthly life they will receive the glory and power of Elohim, the Mormon Deity. And they will stay next to The Father and The Son in the Kingdom of Heaven.

Could Elohim and Jehovah be the same God?

In Mormonism, they are not the same. Mormons use the name Elohim for God, the Mormon Deity, the Heavenly Father. And they also use Jehovah, but for other purposes. In Mormonism, Jehovah is the name of The Son, Jesus Christ.