Laviah Angel of Revelations is the 17th name of God. The Bible script according to the name Laviah is: “O Lord our Lord, how excellent is thy name in all the earth! Who has set thy glory above the heavens”. The name’s meaning is The Marvelous God (Deus Mirabilis). Also, he is one of the Thrones. 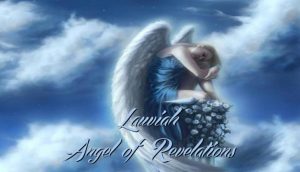 Laviah is the and of the revelations, he protects all the mediums and psychics. He will accentuate your powers such as telepathy, psyche and intuitive understanding. Also, Laviah has the ability to act quickly against torment and sadness. And he can give you a permanent state of joy and spiritual ascension. Laviah has the gift you need music, poetry, literature and transcendental philosophy. He can help you to understand the revelations you get in your dreams and daydreams. You can ask him to help you perceive the great mysteries of the Universe. He can help you penetrate the unconscious.

To be brief, Laviah is the one you need when you are lost in ignorance, false perceptions, atheism and erroneous behavior. He can easily cure insomnia and hyperactivity. Pray for him to help you in anxiety, dropout and marginality. Laviah can protect you from misfortune and unhealthy or misleading spirits. If you or your loved ones are stubborn, with poor perception or material problems, don’t hesitate to pray for his protection. Laviah Angel of Revelations can recover your lack of faith, enthusiasm, trust in others and self-confidence. And he can help you when you meet difficulties with the expression of your knowledge.

In conclusion, Laviah Angel of Revelations is the protector of those who were born between June 11 and June 15. They have the awesome ability of understanding symbolic messages and revelations. Those who were born under the influence of Laviah have great psychic abilities. Their spirit emanates a strong light. These people believe in the love from their heart.