Korean Shamanism Symbols – Also known as Muism or Sinism. Korean Shamanism is the native religion of the Koreans. More popular names of this religion are Shindo or Shindoism. The Korean priests or shamans are called “mu”. But they are also called “Mudang” (female) or “Baksu” (male). The word “mu” meaning “shaman”. 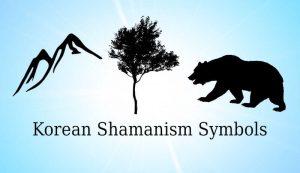 Korean shamanism is based on the belief in the “Source of all being” called “Haneullim” or “Hwanin”. This religious or spiritual philosophy is very complex. The followers of Korean Shamanism have different rituals and ceremonies that they perform. Beside the “Source Of All Being”, there is another important character worshiped by Koreans. She is Sungmo The Holy Mother. Believed to be the first “Mudang” or shaman.

This beautiful religion has numerous symbols. And there 3 major Korean Shamanism Symbols that every Korean know and respect.

The Cosmic Mountain – this mountain is important for Korean Shamanism because The Holy Mother appeared to Pobu Hwasang on top of a mountain. Also Sungmo (the mother goddess or Holy Mother) lives in the Cosmic Mountain. The mountain also appears in myths associated with Dangun, The Sandalwood King. Who arrived on earth under the Holy Tree (which is another symbol) on top of The Holy Mountain. Also, Dangun becomes Sanshin, The God Of The Mountain.

The Bear – this symbol comes from the Dangun myth. It says how a she-bear and a tiger prayed under a sandalwood to become human. The bear endured the hunger and suffering, but the tiger ran away. Then the bear became a woman. She was happy, but she wanted to be able to have a child. The she-bear, now woman becomes a queen and gives birth to Dangun, under the Holy Tree, on The Holy Mountain.

These 3 Korean Shamanism Symbols are very important aspects of the Korean myths and beliefs. The Koreans respect these symbols. All 3 of them becoming an important part of their lives.