Kabbalah Numerology – is a branch of the Hebrew Mystical Sciences. Contrary to other forms of numerology such as Chaldean or Pythagorean, Kabbalah Numerology doesn’t require more information than the name. Every letter of the alphabet is associated with a number from 1 to 9. It is a very simple numerology method. Which makes others to think that it is not as efficient as other more complex versions.

Kabbalah Numerology – How does it work?

Well, the most important thing in Kabbalistic numerology is the chart of letters and the numbers that they are associated with. To find your personal Kabbalah number, you have to sum up the value of each letter of your name. Your middle name counts too. Then you will get a 2 or 3 digits number. This number you should divide with 9. Now you will have a whole number and remainders. Now add to the first remainder 1 and the result will be your personal Kabbalah Number. 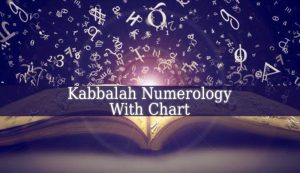 Now, with the example, it doesn’t seem so hard. But let’s see what can you do next. Your Kabbalah number is between 1 and 9. And each number has a special meaning or value. Therefore, the value of 1 is development. 2 represents enlargement. Number 3 holds the value of affection. Meanwhile number 4 is unsuccessful. And 5 symbolizes formation. But number 6 means implementation. And number 7 is mystic. Number 7 always has mystical and spiritual values. Number 8 impetuous. And number 9 brings luck.

But this is just a really simple description of Kabbalah Numerology. This whole branch of numerology is much more complex. And you need a whole course to really learn it. As a reminder, it has over 400 various life paths and combinations. The numerologist also has to be aware of the vibrations each person and number has. It is a really hard work to do.

Kabbalah Numerology uses you name because it was developed to reveal you your true inner self. Therefore, when you visit a kabbalistic numerologist, then be sincere and open. Let the numerologist feel your vibration and tune to it.

Share
Previous Is Echinacea Safe During Pregnancy?
Next PTSD and SSDI Guidelines