An Ishim is also known as Issim, Ischim, Aishim or Izachim. And it is a type of angel or an order in Jewish Lore and traditions. Being one of the 10 most important orders in the Celestial Hierarchy. According to the Jewish philosopher Maimonides, there are 10 angelic orders: Hayyoth, Ophanim, Erelim, Hasmalim, Elohim, Bene Elohim, Cherubim and Ishim. 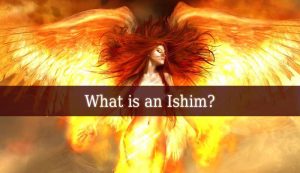 An Ishim is an angel composed of snow and fire (or snow and ice). These angels reside in the 5th Heaven, where Moses encountered them, according to Psalms 104:4. These celestial creatures are described differently, depending on the traditions and lore that we study. Therefore, meanwhile Psalms describes them as angels, in kabbalistic lore, they are not angels. The Ishim are the souls of saints (men).

The order’s name means “Valorous Men” or “Men of God”. Their duty is mostly to extol the Lord since Creation. Their ruler, according to The Zohar, is Azazel. And their chief is Zephaniah. Also, we have to mention that The Zohar equates the Ishim to the Bene Elohim (Thrones in Christianity).

The Ishim or Issim are known as “The Flaming Ones” or “The Souls of Fire”. And they appear in The Book of Judges. Where Manoah and his wife are visited by a “Men of God”. The celestial being tells them that, although they are childless, they will have a son.

Issim is the name of the Animistics. These creatures are “The Blessed Ones”. And they are half human and half angel/god. These creature reside in the 10th Sephirah (Malkuth). Being governed by Archangel Metatron.