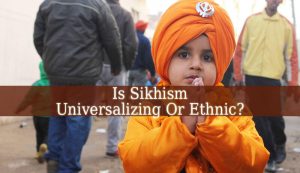 The Two Major Types Of Religions:

The Ethnic Religions – the religions of this group appeal mostly to s specific group of people, living in a specific place or country. The Ethnic religions are thousands of years old. Having their roots in ancient indigenous religious philosophies. Also, most of these religions don’t have specific founders. The two major exceptions being Taoism and Confucianism. The major Ethnic Religions are concentrated around a place or ethnic group. For example, Hinduism is mostly practiced in the Indian Peninsula. Confucianism and Taoism in China. And Shinto in Japan.

The Universalizing Religions – these religions appeal to people all over the globe. They operate on global scale. Not depending on a group of people or specific region. Also, these religions are utmost a couple of thousands of years old. These religions have a founder. And the whole religion focuses on the teachings of the founder and his life.

Therefore, you might already see which category Sikhism belongs to.

Sikhism is a Universalizing Religion. It is a relatively young religion. Starting in around 1500. Also, Sikhism has a founder, Guru Nanak Dev. Who is one of the Ten Major Gurus of Sikhism. Although it formed in the Punjab region (India and Pakistan). It quickly started to spread. But the majority still lives in that region. Due to the quick spreading, Sikhism gained over 20 millions of followers over the centuries.

In conclusion, now you know the answer to the question – Is Sikhism Universalizing Or Ethnic? It belongs to the same category of religions with Christianity, Islam and Buddhism. Which might be a surprise. Because Sikhism is part Hinduism and part Islam. Each of these two religions being part of different categories. Hinduism being ethnic. And Islam being universalizing. But other details, mentioned below, clear out the answer.

Share
Previous Is Sikhism Monotheistic Or Polytheistic?
Next Similarities Between Buddhism And Confucianism