Is Sikhism Monotheistic Or Polytheistic? – Sikhism is one of the biggest religions of Asia. The core beliefs of this religion and if it is monotheistic or polytheistic is easier to understand if we analyze the history of Sikhism. 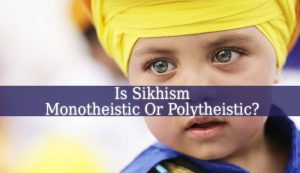 Sikhism is a relatively young religion. It was started at around 15th century by Guru Nanak Dev. Who was the first of the 10 Gurus of Sikhism.

Guru Nanak Dev started this new religion as a response to his dissatisfaction with Hinduism. Creating a religion which combines Hinduism with a younger religion, Islam. Introducing the concept of one single God. And focusing the whole religion on this basis. Therefore, we can now say that Sikhism is monotheistic.

The Core Beliefs Of Sikhism

Although, Sikhism is relatively young, it has strong core beliefs. The two major core beliefs of Sikhism are:

The Concept Of The Only God

There is only one God. He is eternal. God doesn’t have a body and He can’t be seen. God is the one Who created the whole universe. He runs and protects his creations. And He is the one Who has the power to destroy everything. In Sikhism, God always existed. And He will always exist. Also, God is not good, bad or neutral. He just is. Although, this doesn’t apply to human beings. Because, in Sikhism, people born as good.

The Concept Of Salvation

The gurus decided to keep the concept of rebirth, from Hinduism. Intensifying the Sikh’s desire to reach salvation. Through salvation, they don’t only escape the cycle of rebirth. But they also get to become one with God. The biggest reason Sikhs can’t reach salvation is a bad Karma. Therefore, they all try to live a good and kind life. Without creating a bad karma. They avoid behaviors that create bad karma such as: greed, attachment, pride, lust or anger.

Although, Sikhism adopted the concept of The Only God from Islam. Sikhs still celebrate the major polytheistic events and festivals of Hinduism.

But at its core, Sikhism is monotheistic. They worship only one God. They have only one creator.