Is Buddhism Polytheistic Or Monotheistic? – Well, the short answer is neither. But I will give you the longer answer too.

Buddhism is one of the biggest religions on earth. It has millions of followers, not only in south and east Asia, but all over the world. Although it is a popular religion, not many people know its core beliefs. So, we get to the question Is Buddhism Polytheistic Or Monotheistic? Buddhism is Non-theistic. Which means that Buddhism has not God or deities. It might be shocking fro some of you. Even I was shocked when I first read about the core beliefs of Buddhism. Such a peaceful religion with no God. It was and still is fascinating for me. 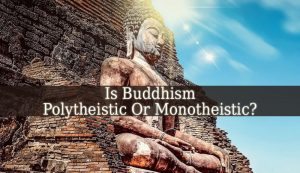 Now there are other questions, that you might think of. For example, “What do Buddhists believe in?” Well, their core belief is that suffering is an important part of every human’s life. And every Buddhist tries to achieve salvation and liberation from suffering. In Buddhism it is important to know the causes of suffering. Behaviors such as desire, craving, expectations, greed and more will cause suffering. And Buddhists try to live without those emotions and behaviors.

Due to its belief system, many consider Buddhism a spiritual philosophy instead of a religion. And the truth is that Buddhists don’t believe in an unseen deity. And they don’t “have to have faith” in an unseen force. Suffering can be seen and sensed. And the core teachings of Buddhism, such as the Noble Eightfold Path, are more like a set of rules to become a better person.

There is another question that many ask: Who are the Bodhisattvas?

Well, let’s see what they are not. The Bodhisattvas are not deities. Yes, they are worshiped by some Buddhists, but not as deities. The Bodhisattvas are ascended masters. They were humans like us, but they achieved enlightenment. And they pin pointed their own salvation, so they can come back to share their teachings to others. The most popular bodhisattvas are Green Tara, White Tara, Kuan Yin, Avalokitsavara and Manjushri. You can see their statues in temples.

In conclusion, now you know the answer to the question Is Buddhism Polytheistic Or Monotheistic? It is neither, because it is non-theistic. Buddhism has very little to do with faith. Their faith is not directed toward a deity. But toward their chance to achieve salvation. Which is dependent only in their behavior and actions. Not on a judgmental God waiting in the afterlife.

Share
Previous Crystals For Prosperity
Next Does Buddhism Believe In Heaven?