Home / Angels / How To Recognize A Nephilim?

How To Recognize A Nephilim? – Although many people think that the Nephilim were all killed by Archangel Gabriel, due to God’s command, there might be some left alive. In fact, there are many theories that believe that many Nephilim survived and their offspring live among us today.

Therefore, there is a high chance that you’ve already met a nephilim in person. If you are not sure, these few characteristics might convince you if that “person” was, in fact, a Nephilim or an offspring. 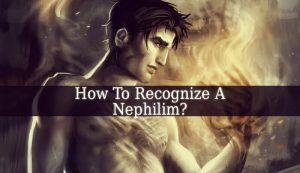 The Nephilim of The Bible are very easy to recognize. They are Giants! They are also evil, blood thirsty monsters. Physically, they were not different than us. The most important difference is their impressive height. The Nephilim are the offspring of The Watchers mating with the daughters of men. But the nephilim from The Bible should not be alive today, because they were all killed by Archangel Gabriel before the flood. Being unnatural creatures, their souls had no place to rest in peace. And their souls became the Demons that we all know today, the evil spirits tormenting humankind.

The concept of Nephilim still leaving among us today comes mostly from the spiritual community. Different psychics and mediums claim that they can recognize Nephilim and people with Nephilim ancestry. They sustain that these Nehpilim are, in fact, not Giants. They have some physical differences, but those are not that easy to spot. Also, some of them look like unearthly beautiful human beings!!!!

Also, some psychics who encountered them say that they have almond shaped and wide spaced eyes and pointy ears. Which makes them look like some kind of fairies.

The easiest way to recognize a Nephilim

You most easily recognize a Nephilim observing its behavior. They are believed to behave strangely, unnaturally and too controlled. Also they are hard to be understood, because their body language is different from ours. They often get confused by the world around them.

According to Travis Sanders, many Nephilim look just like us, and they often don’t even know what they really are. Until they encounter a trigger that brings clearance.

Did you ever meet a Nephilim? Do you believe they still exist? Either way, these creatures are becoming more and more popular in today’s culture. They are present in movies, series, books and comic books. Therefore, they excite the human mind and imagination.

Share
Previous What Are Demons?… Well, Not Fallen Angels!
Next Astaroth