The History Of Buddhism is waste, Buddhism being one of the most ancient spiritual practices. Buddhism is one of the most popular and important spiritual practices in Asia. Its origins are more than 2500 years old. It suffered many changes through these years, but the basic teachings were able to maintain their importance. Buddhism managed to expand and get to every corner or our planet. Thanks to this expansion, nowadays, Buddhism isn’t linked only to Asia, it is a universal spiritual practice with more than 400 million followers all over the world. With a huge experience, flexibility and number of followers, the History Of Buddhism is waste and full of interesting facts. 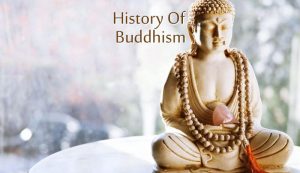 The History Of Buddhism started with the most important character for Buddhists all around the world. The founder of Buddhism was called Siddartha Guatama. He was born a prince in Nepal. At the age of 29, he decides to abandon the luxury he grew up in. He also abandons his wife and son.

Siddharta does this incredible thing to seek his own way to enlightenment. He decides to follow an ascetic life. This experience makes him realize that there is a middle path to enlightenment, there is no use of the extremism of the monks. While meditating on this middle path, under a pipal tree, he becomes enlightened in just a few hours of meditation. The experience under that tree made him become Buddha, the founder of Buddhism. This is how the History Of Buddhism started in 430 BC.

Becoming a Buddha, getting enlightened, made him realize that others need to know the truth, so they can save their own souls, before it is too late. So he visited Varanasi, a sacred Hindu city, and started to give teachings about the real path to enlightenment and searching for followers. His teaching quickly captures the attention. He says that the pain in life can be avoided if you follow an Eightfold Path. This teaching is called The Four Noble Truths. The History Of Buddhism has a new stand, in 424 BC. Buddha explains The Four Noble Truths. These truths are:

– pain is a part of our everyday life

– we have to stop our cravings to stop the pain

– we can stop our cravings and get off the treadmill by following the Eightfold Path.

Buddha spends the rest of his life traveling and spreading his teaching. Until the last day of his life he tried to teach as many people as he could, to save their own souls. Buddha passed away at the age of 80. By that time (between 380-250 BC) there were communities of Buddhist monks. They continued to spread Buddha’s teachings. Asoka also has a big importance in the History Of Buddhism. He ruled over most if the Indian territory. He was a big fan of Buddha. Asoka believed in Buddha’s teachings and supported the Buddhist monks. He was the first to leave inscriptions and carvings about the importance and spreading of Buddhism of his era.

You might also enjoy: Does Buddhism Believe In Heaven?

The History Of Buddhism knows a big problem when there starts to appear a rival tendency. By the year of 250 BC, there were two kinds of Buddhism: Mahayana and Theravada. Mahayana is the version which says that Buddha is one of the past Buddhas who live in another dimension. They can help people like us to reach enlightenment. In the Buddha’s world, there are also Bodhisattvas. They come to our world to live their last live on Earth in which they will reach the state of enlightenment and become Buddhas. The other tendency of Buddhism, Theravada, says that there are no Gods. We can reach enlightenment alone, with the help of no spiritual creatures. It is based on each human beings disciplines and the way they live.

Through all the year until our days, Buddhism met expansion, millions of followers and many versions. The basic teachings of Buddha are still at the basis of every version and tendency of this spiritual practice. The History Of Buddhism is a beautiful tale about a man who found the truth, the real path to enlightenment. This man, dedicated his own life to help others to save their souls. He was able to create an international spiritual way to enlightenment followed by millions.