Hashmal is one of the Kabbalistic angels. He is also known as Hasmal, Chasmal or Hayyal. More than that, this angel is mostly found as Hasmal, not as Hashmal. Furthermore, he is the ruling angel of the choir of angels known as Hasmalim / Hashmallim or Chasmalim. The Hashmallim are a cathegory of celestial beings from Judaism. They are equivalent to the Christian Dominions. 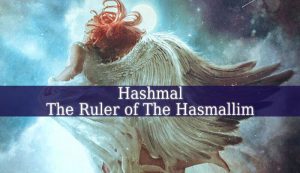 In Jewish lore, Hashmal is a fire-speaking angel. He surround God’s throne according to The Legends of The Jews I, 18. The Zohar explain the name Hashmal. Saying that the term denotes “an inner, supernatural sphere, hidden and veiled, in which the mysteries of the celestial letters of the Holy Name are suspended”. Therefore, in other words, his name denotes a primeval wisdom and wonderful light. Also, it is associated, according to The Zohar, with a hidden inner sphere which hold wisdom and mysteries. Among these mysteries are also the celestial letters of The Holy Name. In other words, the name of God.

Chashmal – there is tale in Hagiga that tells a story about young man who was studying the vision of Ezekiel. Studying the vision, the young man met angel Chashmal. Being the angel who speaks and emanates fire, the angel’s fire consumed the young man. It is a disturbing story, and it also lacks the explanation of its moral, if it even exists.

They are also known as the Hayyot or “living creatures”. It is a high order of angels which is equal to the Christian Dominions. They are ranked also with the Cherubim and Seraphim.

There are different chiefs of the Hasmallim. One of them is angel Hashmal. But Zadkiel and Zachariel are also believed to be the chief angels of this order of angels.

In the Kabbalistic teachings, Hashmallim is belongs to the Yetziratic World, which is ruled by Archangel Metatron.

There is a Jewish legend regarding the Hashmallim. The legend says that the river Dinur is made of the sweat of the Hasmallim. Who sweat because they carry the heavy Throne of God.