Home / Angels / Who Are The Grigori Angels?

Who Are The Grigori Angels?

Who Are The Grigori Angels?

To understand who the Grigori Angels are, we first have to understand what the word “grigori” means. The word comes from the Greek “egrgoroi” and it translates as “The Watchers”. Now it would be clear who the grigori are. They are the group of angels who rebelled against God. And their rebellion resulted in their falling.

The Watchers are very popular. They appear in numerous movies and series. And they are mostly known for falling to Earth, sleeping with human women and resulting in the Nephilim. This tale comes from the Prophet Enoch. 1 Enoch describes not only the Grigori Angels’ actions on Earth, but also thei fall.

The Grigori Angels or Watchers in Enoch 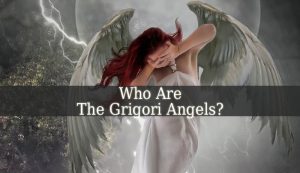 Enoch calls these rebellious angels “The Children of Heaven”. Telling us that they were holy angels of God or Celestial Beings, before the rebellion. They were 200 in number. And they had numerous chiefs known as The chiefs of Tens. But the most notable chiefs are Lucifer (of course) and Semyaza. Other chiefs serving under Semyaza are: Arakeb, Rameel, Tamel, Ramel, Danel, Braqyel, Asel, Ezeqel. Arbaros, Ananel, Batrel, Zaqeel, Kestarel, Arzyal, Sasomaspweel, Turel and Yamayol. (Important to note, if you meet a psychic or medium who’s linked to any of these watchers, avoid that person’s services.)

When the 200 watchers or Grigori descend to Earth, they start to teach human beings secret arts. Such as magic, dark healing methods, alchemy, incantations and rituals. Azazel is one of these teachers. He teaches humans how to make weapons and how to start a war. Other watchers teach other sacred knowledge. Therefore, Amasras teaches humans how to perform magic. Tamel teaches them about the stars. And Kokarerel teaches them the zodiac signs and astrology.

Meanwhile some other watchers decide to commit adultery with human women. The results being the Nephilim Giants. These giants turn against the people killing and cannibalizing them. Even drinking their blood.

Why are the Grigori Angels dangerous?

Firstly, because they are fallen angels. The brought not only war into our world, but also sin, corruption, oppression and hate. Enoch tells what happened next after the watchers transformed our world into “hell”. Archangels like Michael, Gabriel and Sarafel decided to convince God to take action to stop the suffering of people on Earth. This is when God decides that it is time for the Great Flood. Which will wipe away not only the wicked, but all life.

Also, God gives a secret mission to Raphael. He has to capture Azazel, the demon of war, and throw him into the darkness. So, Raphael comes to earth, makes a huge hole into the desert. And then casts Azazel into the hole. Gabriel also gets an important mission. He has to destroy the children of the Watchers, also known as the Giant Nephilim. And Michael becomes the messenger. God send him to Semyaza, the chief of the watchers, to inform him about their close end. All the watchers end up buried under rocks until the day of judgment.

The desperate move of the watchers

Being informed that God will bind them, their wives and children for 70 generations, the Grigori Angels called upon Enoch to help them. They beg for Enoch to write a prayer for them to ask God for forgiveness. The prophet writes down and reads their prayers, until he falls asleep. In his sleep, he has a revelation, that the Watcher’s prayers will not be heard. Therefore, their end will be inevitable. The final message from God to the Watchers, through Enoch is that “because they (the watchers) rejected heaven, they shall have no peace”!

Share
Previous Eleleth
Next Is Uziel Holy or Fallen?