Gnosticism In 1 John and 2 John – Most of the Christians already know the famous passage talking about the false teachers and deceivers. In 1 John, the prophet explains how important is to believe in God. And what do you get if you follow His Son, Jesus Christ. In 1 John 5:13, he also points out that the believers have eternal life, due to their faith in Jesus Christ. 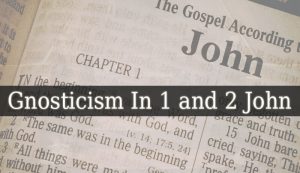 The Prophet also talks about the false teachers and deceivers. Which many believe might be the Gnostics.

In 2 John 7 he says: “I say this because many deceivers, who do not acknowledge Jesus Christ as coming in the flesh, have gone out into the world. Any such person is the deceiver and the antichrist.”

John explains that false teachers started to spread false teachings of The Bible. They deceive people to think that they are teachers of God’s words. Meanwhile denying Jesus Christ.

Many consider the deceivers to be followers of Gnosticism. This is mostly due to their views of Jesus Christ. These false teachers believe that Jesus was just a man possessed by Christ. Who left Jesus’ body on the cross at His death. They also rejected the idea of a sinless life. Considering that the physical body is sinful. And any sins they make, their soul or spirit can be cleansed with different spiritual practices.

Gnosticism In 1 John and 2 John – Other interpretations

The false teachers are Nicolaitans

The Nicolaitans are followers of Nicolaism, which is a form of Gnosticism. It is a Christian heresy or sect which was mentioned even in The Bible. This sect spread their false teachings in Ephesus and Pergamum. Numerous people consider them the real deceivers from 1 and 2 John.

The false teachers are followers of Platonism

Platonism is the philosophy of Plato. But it contains other teachings and philosophies related to Plato. Platonism represented a big danger to the Christian Church. So, numerous priests supported the theory that the false teachers are the spreaders of Plato’s philosophies. 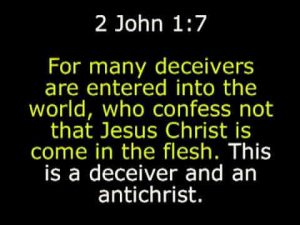 The false teachers are yet to come

There is the theory which states that the real deceiver, false teacher or antichrist didn’t come yet. Although it seems one of the most extreme theories, numerous Christians believe it. They their eyes open, to recognize the real deceiver, when he arrives. Beings also a sign that the Judgment Day is near.

In conclusion, Gnosticism In 1 John and 2 John is present. But it is most observable in 2 John. Although the false teachers might not be followers of Gnosticism.