Fallen Angel Azael – His name means “Whom God Strengthens”. You can also find him under the names of Azazel, Asiel and Assiel. Azael is one of the fallen angels which rebelled against God. We know that, because numerous sources mention who he is and what he did. Let’s find out! 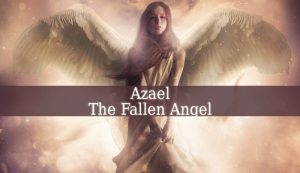 The principal source of information about Fallen Angel Azael is The Zohar. The first story described in The Zohar tells a story about Azael. The angel alongside with Aza lived in a relationship with Naamah. Now, I have to explain who Naamah is. Because she is the patron of prostitution. And the daughter of Lamech, descendant of Cain. So, these three beings sired Sedim, the Assyrian Guardian Spirit.

The second story from The Zohar III 208 tells a story another regarding Azael and Aza. They rebelled against God and now they are chained to The Mountains of Darkness. Waiting for judgment. On the other hand, The Zohar I 37 tells a different story. The two angels rebel against God’s Will and Command. And God banished them from Heaven. As a result, they came down to earth. Where they decided to teach people sorcery and black magic.

Another source called The Dictionaire Infernal also mentions Azael. It mostly depicts the fate of the fallen angel. Azael is chained in the desert. The Celestial Being to be liberated on The Judgment Day.

The famous Book of Enoch also mentions Azael. Being one of the angels that come down to earth to mate with women. And to create the Nephilims.

Azael is an evil angel or demon according to numerous sources. Although, “Vocabulaire de l’Angelologie” by Schwab describes Azael as the protector of hidden treasures. Which is not suggesting that he might be a demon. But, still, I wouldn’t recommend the invocation of the Fallen Angel Azael.

Share
Previous Daoism Might Have Similarities With Hinduism Because They Both Cover A Wide Variety Of Beliefs And Practices
Next Is Sikhism Monotheistic Or Polytheistic?