Buddhism is one of the most known religions of the world. It is based on the teaching of Gautama Buddha (the founder of Buddhism). I am going to present you a few interesting Facts about Buddhism. These facts will help you understand this religion and what is it based in. You will find out some attractive aspects of Buddhism that will make you start to try to found out a little more about it. 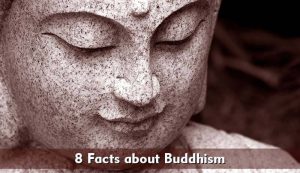 – The first fact is that Buddha is a teacher for Buddhists, not a god or a avatar. This fact makes Buddhism to seem more spiritual than religious. It becomes more real than other religions which are full of fantastic gods, creatures and characters.

– Facts about Buddhism continues with one of the most interesting facts. A few days after Buddha’s birth, an old man predicted that he will become a king and he will change the world.

-Buddha was born a wealthy prince. One day he saw the poverty and sickness outside his palace and he decided to walk the path of truth. He changed his name and left his prince title behind.

-The founder of Buddhism developed the so called “Middle Way” to enlightenment. Buddha saw that the main religions of his period were either too overindulgent or too strict. So he created the middle way by combining the beneficial parts of all those practices. This way the path to enlightenment is more balanced.

-The spot where Buddha achieved the state of enlightenment was underneath a bodhi tree. One of the interesting Facts about Buddhism is that the spot is still preserved. People are visiting that bodhi tree to this day.

-The next one on my list of Facts about Buddhism is that Buddha’s teachings were never spread by violent methods. Buddhists used word of mouth and carvings on stone buildings.

Buddha was traveling his whole life to spread his knowledge. He did that until the age of 80, until he passed away.

-Buddha’s last request from his followers was to work hard to gain their own salvation because everything in this world is changeable.

-The three biggest teachings of Buddha are: do not be ignorant, do not hate others and do not get angry.

These were some of the most interesting Facts about Buddhism. I hope that they are interesting for you too. Buddhism is a very interesting religion and Buddha’s life was rich and full of happiness.