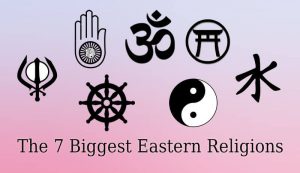 This region is the place where the biggest religions of the world were born.

The biggest and most popular Eastern Religions are: Hinduism, Buddhism and Jainism. But there are some more that you might not heard about before.

Hinduism – the oldest religion of the globe which is still practiced today. It originates from the Indian subcontinent. Hinduism has the biggest history of all the other Eastern Religions. It has a massive amount of religious texts and scriptures. The most important being the Vedas and The Upanishads. Hindus worship thousands of deities. But the most important are Brahma, Shiva and Vishnu.

Buddhism – it was born around the 500 BCE. The founder of Buddhism is Siddhartha Gautama. He became Buddha after years of spiritual practices. His journey started when he first faced the suffering of his people. The he left his family and gave up all of his material possessions and searched for answers. Ultimately, he reaches enlightenment under a Bodhi tree. Then he starts to share his knowledge. Allowing others to find enlightenment themselves.

Jainism – just like Buddhism is the religion founded Buddha, Jainism was founded by Mahavira. He was a powerful spiritual teacher and enlightened one. Mahavira is the 24th teacher of the Jain principles and philosophies. Although the followers of Jainism believe in reincarnation, they believe that they can avoid it only by strict ethical behavior. Their goal is to have a pure Jiva (soul).

Sikhism – began in the Northern region of India. The founder of Sikhism is Guru Nanak Dev. Whom was followed by other 9 gurus. Sikhs believe in one supreme God. The only creator. The one God who created everything, protects everything and destroys everything. The spiritual scriptures of Skhism are called The Guru Granth Sahib. Which contain the teachings of each guru, including the first one, Guru Nanak Dev.

Taoism – also called Daoism. This religion has so many sects, that it is hard to be defined. Although, the basis of the Taoist philosophies is the same. The fundamentals of the religion are The Three Jewels Of The Tao. Which are: Love, Moderation and Humility. Traditional Taoism is polytheistic, but it has numerous monotheistic sects. The central deity on Taoism is the Jade Emperor.

Shinto – it is a Japanese religion. The Japanese word “Shinto” means “The Way Of The Gods”. The core values of Shinto are: respect for tradition, family, nature, cleanliness and ritual observation. Although Shinto is separate religion, it is highly influenced by Buddhism and Taoism. Hence, many Shintoists considering themselves also Buddhists. Just as Taoism, Shinto also has numerous sects. Folk Shinto focuses on shamanism and faith healing. On the other hand, Sect Shinto’s followers worship mountains.

Confucianism – though many think it is not a religion, it works as a religious philosophy. Confucianism contains a complex system of moral, social and political dogma. Appearing more as an ethical system, instead of a religious belief. The cores of Confucianism are: duty, loyalty and humaneness. Although it allows people to believe in ghosts, spirits and certain deities. But only to respect these entities, not to worship them.

In conclusion, the Eastern Religions are numerous. These 7 being the most popular among them. Each of these religions have their own sects and branches. Which makes them more complex and numerous. But they all have something in common. All these 7 religions originate from East, South and Southeast Asia.