Does Buddhism Believe In Heaven? – Buddhism is a very vast religion, with millions of followers. The main point of this religion is this earthly life. Therefore, Buddhists reject the idea of an afterlife, heaven or hell. So the answer to the question Does Buddhism Believe In Heaven? Is no. Buddhists don’t believe in the proper meaning of the word heaven. As a place where our spirit go after death. 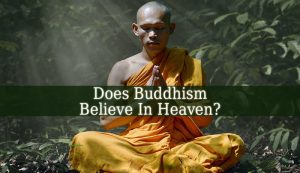 Instead, they place heaven on earth, in this physical life. They consider it a state of mind. Buddhists don’t believe in reward or punishment after death. Therefore, they don’t believe in heaven as the place that waits for us if we have been good. Their only reward for being good is the liberation from suffering. And salvation from rebirth.

Although Buddhists reject the idea of heaven, they have their own version of some kind of heaven. But it is on earth, in this universe, not in the afterlife. And it starts with the Samsara, or universe. The Samsara contains 6 realms. Which can be seen as 6 states of mind. Each realm is associated with different types of beings:

A human being can travel through these realms in his earthly life. For example, when a person is good, acts with compassion and kindness, then he is in the first realm, among the heavenly beings. But when he gets angry, greedy or hurts someone, he goes from human beings to Ashura and Gaki.

Buddhism‘s most important focus is this earthly life. And obtaining enlightenment in this life. As a result, Buddhists don’t spend energy on thinking about where did they come from or where do they go after death.

Buddhists concentrate on living a kind and compassionate life. They seek liberation while they are alive. Thinking about the human soul, the creator (which is present in other major religions) and the afterlife take up energy. That might have been spent understanding the path toward enlightenment.

In conclusion, now you know if Does Buddhism Believe In Heaven. Buddhism’s core beliefs reject the concept of an afterlife. And even the ideas of punishment or reward after death.

Share
Previous Is Buddhism Polytheistic Or Monotheistic?
Next Japa Meditation