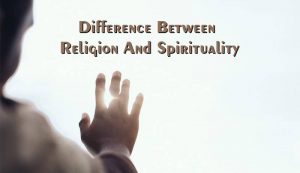 Religion is full of rules, spirituality has no rules. This is the first Difference Between Religion And Spirituality that we notice by studying the two of them. Religion forces us to follow its specific ideology. On the other hand, spirituality is free of rules. It encourages us all to follow our hearts and listen to our intuition. Religion offers you reward and punishment for your actions. Spirituality allows you to be the best person that you can be. It lets you be good and to be happy for it, not to fear of punishment or desire reward.

In religion, there is a lot of fear. You have to fear God because he will punish you and send you to Hell. Religious people act good because they know that their actions have consequences. And God punishes or rewards them. Due to their actions. While spirituality is only about love. Loving yourself and loving the others will make you life a harmonious life. When you love yourself and the others, there will be no actions that result in bad consequences. When you love others, you don’t hurt them, you want only good for them. So you act good by love, not by waiting for a reward or fearing the punishment.

Religion tells you the black and white truth, while spirituality allows you to discover it yourself. Religion tells you exactly how the world was created and forces you to believe it. This is the only truth that you can accept in religion. Spirituality and spiritual practices can help you to find the truth yourself. If you learn to talk to your inner self and ask the right questions, you will find all the answers you need.

Other big and hurtful Difference Between Religion And Spirituality is that religion separates humanity, while spirituality unites us. Just think about how many religions are on Earth. They are in war, fighting for their own truth. Every religion sees their own truth as the only truth, separating one from another. Spirituality sees the light and energy of God in all of us. The same energy or light is in me or you. This makes us equal. And this is the aspect that unites us as brothers.

Religion has punishment, while spirituality has karma. But there is a big difference between the two of them. Religion talks about punishment in Hell after we die if we did something wrong. If you are a thief, you are going to be punished by going to hell, just like someone who took another people’s life. Karma is the law of attraction. If you are a thief, you will be attacked by a thief. If you took someone’s life, you will be killed by someone. Karma can happen to you on the same life you did your actions or in another life.

Now that you know the Difference Between Religion And Spirituality, you realize that they are not the same at all. You can be religious, but practicing spiritual work. It will help your soul to evolve, escape the fear of punishment and knowing your inner self better. The spiritual world is important, try to find our more about it.