Daoism Might Have Similarities With Hinduism Because They Both Cover A Wide Variety Of Beliefs And Practices – Although, Daoism and Hinduism differ in many aspects, they both have a major thing in common. Both of these religions posses a wide range of beliefs and practices. Which vary dependent on regions, countries and other factors. Therefore, even if Hinduism is much older than Daoism, they both have millions of followers. And both religions are centered in two major countries. Hinduism in India and Daoism in China. As result of the large number of followers, many sects appeared and still appear from these two major religions. But let’s see large are they as beliefs and practices. 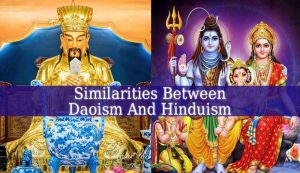 Also known as Taoism. The name of this religious philosophy comes from its core belief. That the whole world started with a Dao. Then the heavens and earth formed. In Daoism the Heavens represent the Yang. And the earth is the Yin. Alongside with the world, the giant Pan Ku has been born. And when the giant died, his parts became world that we know.

Therefore, his eyes became the sun and the moon. His blood transformed into rivers and oceans. Hid breath became the wind. And his voice became the thunder. Also, the rain is his sweat, and his flesh the soil.

We, humankind, developed from the fleas that were living on the giant’s body. For someone who never had contact with Daoism, these beliefs might seem weird. But they represent the foundation of the religion. The followers of Daoism also believe in gods and goddesses. But they are considered humans who became gods after died.

If Daoism fascinated you, then Hinduism will impress you with thousands of deities and a vast history. Hinduism is almost 5 thousands of years old. Due to its vast history, Hinduism gained over the years a wide range and variety of beliefs and practices. Also, numerous sects appeared over the years. Which are similar with Hinduism at their core beliefs, but they still differ as practices.

Some of the major practices in Hinduism are: pujas, festivals, cycle rituals, vegetarianism, venerating deities in Hindu temples, shrines and many more.

In conclusion, both of these religions are very important globally. Having millions of followers. Although, they seem different, they both have numerous deities, myths, legends and beliefs.