Hindu Temple – The Changu Narayan Temple is the oldest temple that still exists and can be visited. It is situated in Kathmandu, Nepal. Some legends sustain that it dates back to 325 A.D. Founded by Licchavi King Hari Datta Verma. This beautiful temple contains breathtaking masterpieces from the 5th-12th century Nepalese art.

The numerous historic evidences show that Changu Narayan already existed in the 3rd century A.D. There are also evidences from the Licchavi King Mandeva from 464 A.D. And the temple also has recordings about the military exploits of King Man Deva. Who reigned between 496 and 524 A.D. The early Hindu temple designs are based on symbolic forms derived from central beliefs, myths, cardinality and geometrical principles. 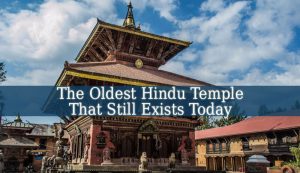 The oldest temple of Nepal is beautifully decorated on the outside with arts depicting Lord Vishnu. But it also has breathtaking sculptures of Lord Shiva, Krishna, Ashta Matrika, Kileshwor and Chhinnamasta. This beautiful temple has 4 big entrances. And each entrance has huge life size sculptures of animals. He walls and pillars of the temple also contain beautiful paintings, sculptures and and texts. The Sanskrit inscriptions are the oldest in Nepal. The oldest pillar with inscription being erected by King Manadeva in 464 A.D.

The most beautiful monuments of the oldest Hindu Temple

If you have the occasion to visit Changu Narayan, I recommend you to spend as much time there as you can. Don’t miss anything. But in case you have only a short time to visit don’t miss these 11 monuments. Firstly, visit the Historical Pillar which contains the oldest Sanskrit inscriptions. Then continue with Garuda. A beautiful sculpture of the flying vehicle of Lord Vishnu. After that you should take a look at the Statue of Bhupalendra Malla and Bhuwan Lakshmi. They were the King and queen of Kantipur. Then there is the beautiful sculpture called Gurada Narayan. A beautiful sculpture of Lord Vishnu riding on Gurada. This iconic sculpture also appears on the 10 rupee paper note.

The Chinnamasta is a beautiful temple dedicated to the devi. And you have to see it due to its beautiful art-pieces. The next stop will be at the Wishworup. It is a sculpture from the 7th century. The Wishworup depicts Lord Krishna’s manifestation to his devotee, Arjun. Three beautiful masterpieces to continue with. So, The Vishnu Vikrant is also from the 7th century. This gorgeous sculpture depicts Lord Vishnu and Bali Raja. Narishma is another 7th century sculpture. This sculpture depicts one of Lord Vishnu’s reincarnations, Narasimha, while he kills the demon Hiranyakasyapa. And saves his devotee Prahalad. The last, but not least, is Kileshwor. These are small temples for Lord Shiva. A legend says that the Kileshwor were constructed on the place where Lord Shiva himself appeared to protect the hill.

In conclusion, if you are planning a journey to Nepal, don’t forget to add The Changu Narayan Hindu Temple to your list. It is breathtakingly beautiful as architecture, art-pieces and sculptures. Take your time and analyze all the small and fascinating details of the building. Because all the walls, pillars and gates have beautiful decorations. It will be a journey well spent.

Share
Previous Why Is The Caste System A Central Part Of The Hindu Religion?
Next Who Was Considered Judaism’s Greatest Prophet?