Cassiel The Angel Of Solitude

Cassiel is also known as Casiel, Casziel of Kafziel. And he is mostly known as The Angel Of Solitude and as The Angel Of Tears. A soruce describes him as the angel which “shews forth the unity of the eternal kingdom”.

Cassiel is one of the three rulers of the planet Saturn. And the rulers of Saturday. As described in The Magus. He is the chief angel of Saturday. The other angels ruling over this day of the week being Archangel Uriel and Machatan. But some sources associate him with Thursday. Ruling over this day of the week alongside Sachiel (the chief angel of Thursday) and Asasiel. 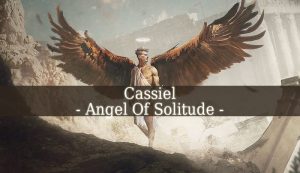 Cassiel The Angel of Tears

Cassiel is the holy angel of tears. But this title also belongs and is mostly given, to Archangel Sandalphon. This powerful angel lives in the 7th Haven. Being the ruler of the heavenly place. Also, he rules over The Order Of Powers. Being the Sarim or Prince of the Powers. Angel Cassiel often appears as the angel of temperature. And he is often believed to be the angel of time. The Angel Of Time is mostly known from Tarot, being the 14th Tarot Card. The angel of time is described as “standing between earth and heaven, clothed in white robe, with wings of flame and a golden halo around his head.

He has one foot on the land, the other on the sea, behind him is the sun rising and on his brow is the sign of eternity and life: the circle”. But this position is mostly associated with Rempha, the genius of time.

Muslim philosopher called Averroes associates the angel with Saturn. A very popular association found in many ancient texts and lore.

Cassiel also appears in The Magus and The Book Of Spirits. In these books you can find the angel’s sigil and celestial signature (both shown below).

Also, in Picture Museum of Sorcery, in Grillot, you can find The Book Magic and Alchemy, which talk about Cassiel on page 113. This page is a reproduction of a page from The Book of Spirits, mentioned above. And it describes the conjuration of Cassiel.

Kafziel is one of the angel’s holy names. And it means “Speed Of God”. Mostly known as the angel which governs the death of kings. Being one of The Angels of Death. He is one of the 7 archangels, according to Geonic tradition. Having dominion over the planet Saturn, next to Archangel Michael. Although as Qaphsiel, he is the ruler of the Moon. According to Jewish Magic and Superstition.

Angel Kafziel also appears in The Zohar. Which describes him as the chief aid of Archangel Gabriel. Serving in this post with Angel Hizkiel. The scene happens when Gabriel bears his standard in battle.

Nowadays, you can see this angel in the TV series Supernatural. He became really popular due to this TV show.