Buddhist Symbols are representations, signs and images that have particular importance for Buddhists and the Buddhist culture. They are sacred symbols used since the Buddhism started and found on ancient paintings and sculptures all over the ancient Buddhist cultures. Each of these symbols have its own importance and significance for practitioners of Buddhism. 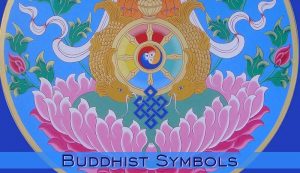 The lotus flower defines the true nature of every mankind. The lotus flower has its roots in the mud. But it has the ability to grow above the dirty and dark mud and start to blossom. Its flowers are beautiful and sweet smelling. This transformation of the lotus is linked to the beautiful transformation of a human being seeking and finding enlightenment. Mud is the suffering and pain that we have to learn how to fight. The enlightenment and our pure spirit is the sweet-smelling flower.

This symbol is one of the most important Buddhist Symbols. It defines the Universal Connection. In this world, everything is connected. It can also symbolize the eternal connection between wisdom and compassion, the two things we need to achieve enlightenment.

This symbol is linked to our courage of facing the suffering and pain of this world and to swim freely through them like fish in the water. In the Buddhist cultures the two golden fish also mean luck and fortune. The ancient cultures also considered that this one of the Buddhist Symbols defines the Ganges and Yamuna rivers.

If you ever visited a Buddhist Stupa (shrine), then you already met this symbol. It is placed on all four sides of the stupa. They are the Wisdom Eyes of Buddha that can see everything. The curly line situated where the nose should be, symbolizes the unity of everything and that the way to enlightenment is through Buddha’s teachings.

The Dharma Wheel also called The Dharma Chakra is the best representation of the Buddha. It is the universal symbol of Buddhism. It has eight spikes. These spikes represent Buddha’s Eightfold Path. We can say that it is the most popular and important of the Buddhist Symbols because it symbolizes Buddha himself and his sacred teachings.

These Buddhist Symbols are just a few of the many symbols of Buddhism. There is also The Conch Shell, The Vase, The banner of Victory, The Lion and many other Buddhist Symbols. These are the sacred representations of Buddha’s teachings and the religion he crated by helping millions to save their souls.