Beliefs Essential To Hinduism Include Selflessness Devotion And Duty – Hinduism is the oldest religion on the globe, still practiced today. It is believed to be about 4000 years old. Although many think that Hinduism is a sect of The Vedic Religions. It was also influenced by ancient religions such as Shaivism, Vaishnavism, Shaktism and Tantra. Hinduism even enriched its beliefs and philosophies with some tribal traditions. The exact origins of Hinduism are still unknown. Hence, Hinduism doesn’t have a founder.

Is Hinduism A Religion? 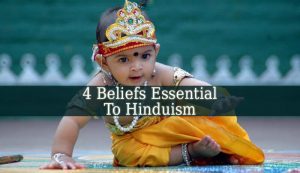 Many people debate if Hinduism is really a religion. Numerous persons sustain that Hinduism is a way of Life. Mostly due to the fact that it doesn’t have a founder or a special holy book. Also, Hinduism accepts other religions as paths to salvation. Not forbidding its followers to experiment with other religions.

Therefore, if Hinduism is a lifestyle, then we can understand why Beliefs Essential To Hinduism Include Selflessness Devotion And Duty. For example, Dharma represents a set of prescribed duties for Hindus. These duties require devotion and responsibility. The Dharma controlling each and every action of a Hindu.

Selflessness is another very important concept in Hinduism. They believe that only by practicing selflessness and helping others will you obtain salvation or liberation. The Ego or Self creates a wall or blockage. Which forbids you from growing spiritually and achieving spiritual awakening. The Hindu belief in Karma is also very important. Because every act that grows your ego and doesn’t serve the higher good of others creates Karma. Which results in another reincarnation or rebirth. Which is another chance to dissolve that karma. And to live a life without creating another one.

Nonviolence is another essential belief in Hinduism. This is why the majority of Hindus are vegetarian. Nonviolence is one of the best ways to avoid karma and rebirth. Living your life without violence is the highest virtue in Hinduism. Many believe that nonviolence means not killing or injuring another human being or animal. But it also means that you don’t harm or disturb other creations of God.

Beliefs Essential To Hinduism Include Selflessness Devotion And Duty.