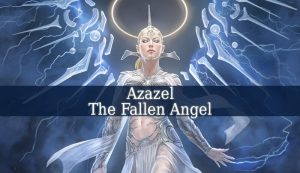 Enoch describes the rebellion, fall and sin of the so called Watchers. And Azazel is one of these fallen angels. In fact, he teaches mankind to make weapons and to start wars. Enoch mentions the demon as one of the Chief Sons of God. He is also one of the 21 rulers of the 200 fallen angels or Watchers/Grigori.

The Prophet met the fallen angel. He describes the beast as having:

Azazel in The Apocalypse of Abraham

The fallen angel is an important character in the pseudepigraphon known as The Apocalypse of Abraham. This sacred text has two parts, the first one describing the early life of Abraham. And the second one describes his journey to Heaven. Azazel appears at the end of the 40 days of fast that Abaraham held.

Abraham and his angelic companion, Iaoel, go to Mt. Horeb to make sacrifices. During the ritual, an unclean bird came and started to talk to Abraham. Iaoel identifies the bird as Azazel. The fallen angel tells Abraham to flee from Iaoel, or he will be destroyed. The holy angel tells Abraham to send the fallen one away and to never talk to him again. Then Iaoel takes Abraham to a journey to see “the fullness of the universe”. At one point of their journey, they arrive to The Garden of Eden. Where Abraham sees many people, but they are divided in two. God tells Abraham the those on the left are the people of Azazel or Azael. In other words, they are the corrupted ones. And those on the right, are the good ones.

In the Garden of Eden, Abraham also sees the huge forms of Adam and Eve in front of a tree. Behind them is Azazel standing. Looking like a huge dragon, with 12 wings, human hands and human feet.

The Demon Azazel in other sacred texts

In Rabbinic literature, the Targum and Leviticus 16:8, the fallen angel is the scapegoat.

But he also appears in The Zohar. Which describes the fallen angel as the chief of Bene Elim. Also known as Ischim, the lower angels, or men-spirits.

A Jewish legend mentions the fallen angel. According to the legend, Azazel refused to bow down before Adam, when the first human was presented to the angels in Heaven. Due to his act, he was thenceforth dubbed “The Accursed Satan”.

The same legend exists in Islamic Lore. According to the legend, when God commended the angels to worship the first human, Azazel refused. He asked God “Why should a Son of Fire (angel) worship a Son of Clay?”. Then God cast the fallen angel out of Heaven. And also changed his name to Eblis.

Many think that the fallen angel was an ancient Semitic god of the flock. But then he was degraded to a simple demon.

Share
Previous Is Uziel Holy or Fallen?
Next Hashmal