4 Astral Projection Dangers That You Should Know About

Many people practice Astral Projection for spiritual growth. They achieve it through practice, meditation and other methods. But many people close their eyes to the Astral Projection Dangers. Therefore, many people sustain that this practice is entirely safe. And can’t bring harm. But the truth is, that there are many reports of dangerous situations resulted from out of body experiences. These dangers should be considered before deciding to practice astral projection periodically. 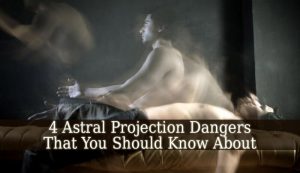 Obsession – this is the result of imbalance in your routine. The out of body experience is so uplifting and extraordinary, that many people become obsessed of it. They practice it too often. Until they spend more time in the astral world, then in the physical world. Yes, we have to explore the astral world, to grow spiritually. But we were born in this physical form for a reason. And it is to learn to find a balance. Therefore, if you consider starting an astral projection method, be aware of the importance of balance between the two worlds.

Getting Lost – I know that most of the OBE practitioners are yelling “Silver Cord” in chorus. But not many people who experience OBE are actually aware of the cord. Many can’t even see it. And this creates disorientation, panic and confusion. In the astral world, at first, you can’t control entirely your destinations. Which can take you very far from your physical body. And this accentuates the desperation. The key is to focus and have a clean mind.

Mental Exhaustion – Traveling to much the astral world can bring, not physical, but mental and emotional exhaustion. Resulting many times in fatigue and depression. The physical body is sleeping while you astral project. Therefore, it is not affected. But your emotional and mental health may suffer a lot. So, if you are feeling the exhaustion, take a break and just sleep. Let your mind rest.

Possession – The astral world is full of spiritual creations. But there you can meet also unkind beings. And even demons. So, many astral travelers use different protections for their physical bodies. Because when your spirit is traveling, they sustain, your body remains vulnerable. It basically is an empty vessel for demons and other beings. Also many people experience attachments. Which means that creatures from the astral world attache to them. Which s also very dangerous in many ways.

These 4 Astral Projection Dangers are very popular in the OBE community. Many sustain them. Others say that Astral Projection is totally safe. But I wouldn’t risk my own safety. So, before starting to practice Astral Projection, be aware of these 4 dangers. And find ways to avoid them. There are many teachers who can show you how to have a safe travel.