6 Reasons why you should not worship Astaroth

If you are familiar with the occult, you might have heard about Astaroth. But her name also appears in goddess worship. In fact she was a very popular goddess worshiped in different places around the world. She is known by different names in different regions, such as: 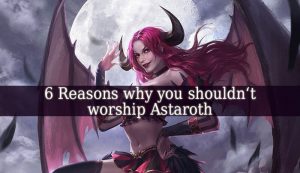 Astaroth is not just a goddess, she is a demon. Although many religions and cults consider her a goddess of fertility and love, you shouldn’t worship her. Here are some reasons why!

Reasons why you should not worship Astaroth:

My opinion on Astaroth

I am not into the occult, and I try to avoid everything evil and negative. Therefore, I will never tell you that it is safe or a good idea to worship, invoke or summon Astaroth. Although there are some sources that consider her an angel or a goddess, the evidence of her being a demon is plenty and very convincing. I hope that these information opened your eyes a little bit, and you will pay more attention to who are you worshiping or invoking for help.

Share
Previous How To Recognize A Nephilim?
Next Hofniel