Asmodeus is a powerful demon or fallen angel. His name means “Creature of Judgment”. Asmodeus is more present in Persian and Arabic lore, than Jewish or Christian. But in any lore or texts he might appear, he is mostly evil.

The demon was initially a Seraphim. Belonging to the highest order of angels. But he rebelled against God, fighting beside Lucifer. And being cast out of Heaven with the other fallen angels. 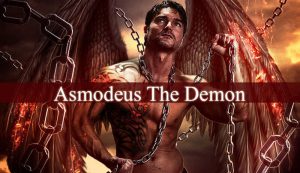 Asmodeus appears in The Book of Tobit, where he is a “raging fiend”. He slew the seven bridegrooms of Sarah. By killing each one of them on their wedding night before they could consume their marriage. Until he was stopped by Tobias and Archangel Raphael. The archangel banishing the demon to “upper Egypt”. In The Encyclopedia of Religions, Forlong describes Asmodeus as “the Talmudic Ashmedai”. Ashmedai was the demon borrowed from the Zend Ashmedeva. The same demon has been considered responsible for getting Noah drunk. 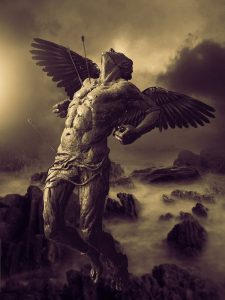 The Magus II depicts Asmodeus in color as one of the “Vessels of Wrath”. Also in The Book of the Sacred Magic of Abra-Melin the Mage we find an interesting description of the demon. It says that numerous Rabbins consider Asmodeus the result of the incest between Tubal-Cain and Naamah, his sister. And also calling the fallen angel “The Demon of Impurity”.

In Jewish lore, Asmodeus is the father in law of Bar Shalmon. Which is another very powerful demon. According to The Jewish Encyclopedia, page 510.

According to Coptic Gnostic writings, Asmodeus is one of the Angels of Punishment. Which title also goes to Archangel Ariel (according ot Pistis Sophia) and Guardian Angel Laylah.

In Persian lore, he is often identified with Aesham. Which is one of the seven main archangels.

The demon appears in The Testament of Solomon. The texts say that Asmodeus lives in the constellation Ursa Major (Great Bear). There he prepares plots against newlyweds. He also spreads the wickedness between humankind. The demon also spreads madness about women, ruins the beauty of virgins and kills with no mercy. Being a powerful murderer demon. 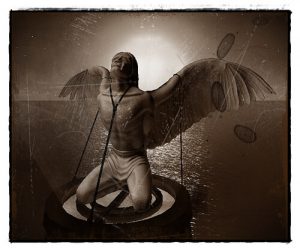 King Solomon is the one who brings Asmodeus into our world with the help of Beelzebub. Then the demon tells Solomon, that he is the offspring of a human mother and an angelic father. Being one of the Nephilim Giants. Alongside Azael the fallen angel. Asmodeus also tells King Solomon that he is afraid of water. The king handles the demon carefully, because he knows how powerful he is. Therefore, Solomon keeps the demon in chains, surrounded by jars filled with water. The demon’s main duty as the server of Solomon is to make clay vessels for The Temple.

A rabbinic tale explains us how and why did Solomon and Asmodeus made contact. The king needed something to cut stone for the Temple. And a stone-cutting worm was his best option. But only Asmodeus knew where the worm is. Solomon captures the demon and makes him fall asleep. And then chains him the help of Solomon’s ring. Then the fallen angel is forced, with the other demons to build Solomon’s Temple.

The Escape of The Demons

The king will not rule the demon for too long because his kingdom will be divided. And all the demons of Solomon will get free. Then people will worship them as gods. The first demon to break out being Asmodeus. He tricks Solomon, by telling the king that he will show him his greatness, if Solomon removes his chains and gives the demon his ring. Well, Solomon is tricked, obviously. And the demon send him in exile and throws his ring into the sea. But Solomon’s lover find the ring and takes it back to the king. Solomon gaining back his power. And then puts the demon into a jar, as punishment. 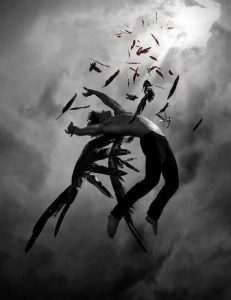 Asmodeus also appears in texts about Demonology, which is not a shocking news, being one of the most popular demons. Therefore, according to Demonology, Asmodeus in Hell. And his main responsibility there is to control the gaming houses.

Wierus, a popular demonographer (yes, this position exists) knows Asmodeus. Telling that is someone wishes to invoke the demon, he must be bareheaded. Because, otherwise, he will be tricked by the demon. Although, I recommend not invoking him at all. Mostly because he is an evil and powerful demon.

The demon also appears in The Lore of Lilith. Which considers that Lilith was the first women created. And the union between Adam and Lilith resulted only in demonic creations. Asmodeus being one of them. Although, other sources consider him the Husband of Liltih, the demon queen of lust.

In The Demonic Hierarchy, Asmodeus is the ruler of “The Revengers of Evil”. Who cause bad judgment. Also, when he is invoked, he appears with 3 heads (ogre, ram and bull). And he has the feet of a cock and ugly wings. And he usually rides a dragon and breathes fire.

The Demon in modern art and literature

In The Devil on Two Sticks by Le Sage, Asmodeus has the main role. The demon also appears in The Devil’s Own Dear Son”. Where Asmodeus is the son of Adam and Lilith.

The many names of the demon Asmodeus

Asmoday – he is a fallen angel. According to Amulets and Talismans by Budge, Asmoday has wings and can fly. He also has knowledge about the future. The demon also teaches mathematics. And he has the ability to make people invisible. Asmoday holds the Ring of Vertues. Which allows him to govern over 72 legions of evil spirits from Hell. When he materializes himself he has 3 heads (man, bull and ram).

Ashmedai – a very popular angel in Rabbinic lore. Being called “The Messenger of God”, hence being an angel. Ashmeday is the ruler of the South. Governing 66 legions of spirits. And he is also the opponent of King Solomon.

Although in Rabbinic lore he is an angel. In other sources, texts and lore he is mostly evil, a fallen angel. Numerous occult sources considering Ashmedai the serpent that seduced Eve. Although, he is not considered a harmful demon. Some legends depict him as a Cherub, others as The Prince of Sheddim” or as “The Great Philosopher”.

In conclusion, although, in numerous texts he appears as a holy angel, I DO NOT RECOMMEND PRAYING TO HIM OR INVOKING HIM. Asmodeus is very powerful and dangerous.