Archangel Sariel is one of the seven archangels. It firstly appears in the Book of Enoch. Sariel’s name means “God’s Command”. You can find him under other names such as Archangel Azrael, Suriel, Zer-Achiel and Saraqel. 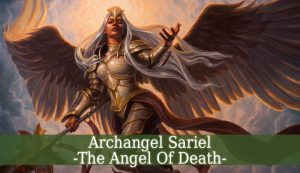 Archangel Sariel is the angel of death. His reputation as the angel of death is due to the fact that he fetched the soul of Moses on Mount Sinai. But he is also described as one of the fallen angels. He appears as a fallen one in two books: Gustav Davidson’s “A Dictionary Of Angels” and Leonard Ashley’s “The Complete Book Of Devils And Demons”.

This Celestial Being‘s main responsibility in the Heavens is to punish those angels who violate The Divine’s sacred commands. But he also punishes the souls of sinners. As described in The Book Of Enoch. Sariel is a prince of the presence, such as Metatron. But he is also an angel of healing, such as Raphael. 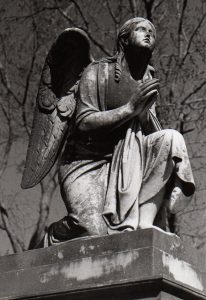 The Kabbalah depicts Sariel as one of the seven archangels who rule Earth. The recently unearthed Dead Sea Scrolls also contain his name. Sariel’s name appears on the shiealds of “The Sons Of The Light”. This group of soldiers belongs to the Third Tower, from a total of four.

When you invoke Archangel Sariel, he appears in the form of an ox. Due to his description as an ox, he is linked with the skies and the celestial forms. He holds sacred knowledge about the Moon. He is also a great protector against the eyes of the evil.

According to other sources, Sariel is one of the nine angels of the summer equinox. Angel Oranir being the chief prince of the 9 powerful angels.