Archangel Raphael is the healer. His name’s meaning is “God Heals” of “God has healed”. Also called “the divine physician”. Archangel Raphael is the one who can heal physical, mental or spiritual problems. He is the angel of prayer, love, light and joy. But he is mostly known as the healing angel. Healing numerous prophets and characters from The Bible. For example, he healed Abraham after his circumcision. Raphael also healed Jacob’s dislocated hip.

Raphael is the angel of science and knowledge. And he belongs to at least 4 of the heavenly orders. Therefore, he is a Seraphim, Cherubim, Dominion and/or Power. But he is mostly known as an Archangel. 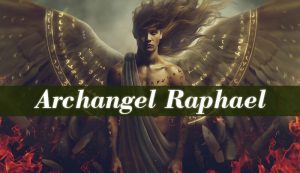 In paintings and other art forms Raphael appears holding a fish, looking like a pilgrim. The Bible says that it is the fish that Tobias caught when he was traveling to Media with Archangel Raphael. On their journey, Tobias had no idea that he was traveling with an archangel. Raphael taught Tobias how to use the smoke from the fish’s heart and liver to exorcise his wife. Then, before revealing himself, he thought Tobias how to use the gall of the fish to restore the eyesight of his father. Due to this journey, Raphael became the protector angel of the travelers. At the end of the journey he reveals himself to Tobias as “one of the 7 holy angels”.

But he is sometimes depicted as a winged angel. And there are some paintings of Raphael as a Seraph. Having 6 wings.

You can pray for his protection anytime you are going to a journey. He will keep you company and protect you. Archangel Raphael is considered the Guardian Angel of Humanity. Raphael helped Noah to build the ark. He also gave Noah a medical book before they got ready for the flood. Raphael is the angel who gave the special ring to Solomon. With the help of this ring, Solomon was able to control thousands of demons. These demons built Solomon’s temple. They built it in only one night. 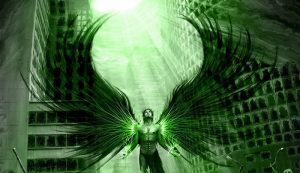 Archangel Raphael is the first angel who entered the Bethesda pool. The person who entered it next was instantly cured from his disease. Bethesda is believed to have curing powers since that. Archangel Raphael is very often seen near ill patients. He takes care of people who suffer from health issues. You can ask for his help anytime you or your loved ones have health problems. He loves to heal and teach others to heal. He can teach you to heal yourself and others. The spiritual healers very often ask for Raphael’s help and protection before a healing session. There are healers who picture themselves holding Raphael’s hands while healing their patients.

Archangel Raphael is not only a healer, but he is also the angel of the sun. He is the chief of the virtues, governor of the south, guardian of the west and ruler of the 2nd Heaven. But Jewish lore also describes him as the guardian of The Tree Of Life. Raphael is also believed to be the guardian of Eden. He is one of the 6 angels of repentance. But different occult teachings also consider him one of the 7 Angels of the Apocalypse. Or one of the 10 holy Sephiroth. 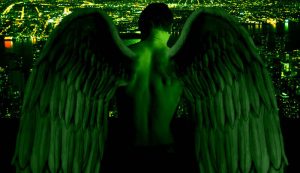 Archangel Raphael has Chaldean origins. His first name being Labbiel. Then he became more and more popular as Raphael, the healer. Becoming one of the 3 most popular angels (next to Michael and Gabriel).

The Book of Tobit describes the journey of Raphael and Tobit’s son, Tobias. The tale that I described above. But still in this book there is a tale about how the Archangel banished Asmodeus the demon. The fallen angel killed 7 bridegrooms of Sarah in their wedding night. Until Raphael banished the demon to upper Egypt. 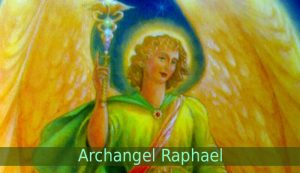 The Zohar describes Raphael differently. Raphael’s duty is to heal the earth. And to heal men from their illnesses. The Sefer Noah describes Raphael giving Noah a medical book. Which many think might be Sefer Raziel also known as The Book of Raziel.

Although, excepting Enoch, most sources describe him as a holy angel, Raphael appears as a demon in some other texts. An ancient Ophite diagram depicts Raphael as a demon on earth. He has a beast-like form.

But every other sources still depict him as a friendly angel. The healer from The Bible. And the one that has as duty to heal us and the whole earth.